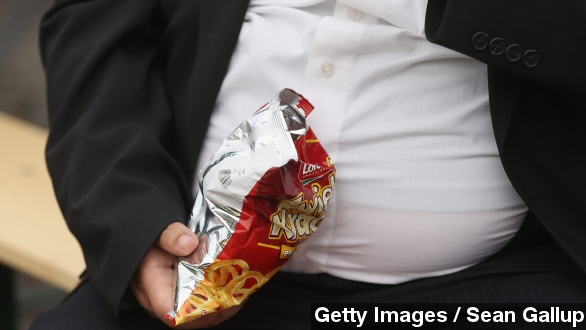 By Madison Burke
September 11, 2014
A study for University College London suggests obese people who are discriminated against gain more weight than those who are not.
SHOW TRANSCRIPT

"Fat shaming" is something millions of overweight people say they experience daily. It's a term that can mean many things, from being treated disrespectfully by doctors, to receiving poor service at shops or restaurants, to being called names by strangers.

Researchers studied nearly 3,000 obese adults who felt discriminated against and watched how their weight changed over four years.

The results showed those who reported experiencing fat shaming gained more weight than those who did not.

The findings might seem counterintuitive. The subtext of most forms of fat shaming is that the person should lose weight or that they're only overweight because they're lazy and have an unhealthy diet.

Urban Dictionary's first definition of "fat shaming" is, itself, an example of those stereotypes. The site calls fat shaming "a term made by obese people to avoid the responsibility to actually take proper care of their body."

But in recent years, body acceptance has gained traction as the real way to motivate healthy lifestyle changes. WebMD explains having a positive view of your own body makes it easier to make healthy choices and that facing stereotypes and negativity tends to just make things worse.

The authors of this recent study also say "weight discrimination is part of the obesity problem and not the solution" and ask that people stop shaming those they care about and offer support instead.