'Fat Guy' Back On The Road, Biking Across America 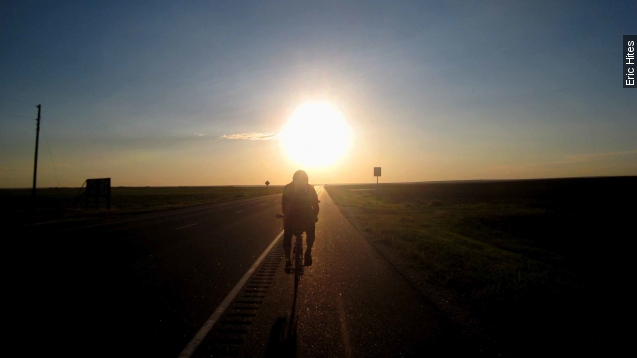 SMS
'Fat Guy' Back On The Road, Biking Across America
By Ryan Biek
By Ryan Biek
July 23, 2015
A 560-pound man is getting help from those he has inspired as he bikes across the country.
SHOW TRANSCRIPT

Eric Hites is a 560-pound man taking transformation to a whole new level. In a mission he himself calls "Fat Guy Across America," he's biking from the East to West Coast to lose weight.

Hites started in Massachusetts, and he told The Newport Daily News he lost 60 pounds in the first two weeks.

But 90 miles from where he started, equipment problems slowed him down, and for days he was stuck in Rhode Island.

So many people have been inspired by his story, though, he's already received almost $2,500 in donations for a new bike on his GoFundMe page.

But that money is probably going to be used for the camping aspect of his trip instead. Rhode Island bike shop owner Rob Purdy actually built Hites a new bike, which reportedly should make it all the way to California.

Purdy told WCAU: "I was pretty inspired. I was like, he's kind of crazy, you know what I mean? That's an interesting way to approach trying to lose weight and get your life on track."

But losing weight is actually Hites' second goal. On his trip's blog, he said his No. 1 goal is "to prove things to my wife and my love."

Hites told The Newport Daily News the more than 800 people following his trip keeps him motivated. He said, "By completing this ride I hope to encourage others to get up and get moving no matter their weight."