The Longest War In Latin America Is Close To Being Over 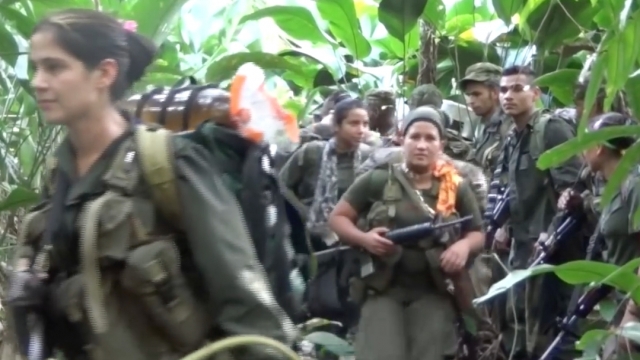 The longest war in Latin America looks like it's just about done. After four years of negotiations, the Colombian government and the Revolutionary Armed Forces of Colombia, or FARC, have signed a peace agreement.

SEE MORE: Why US-Backed Colombian Drug Policy Is On Its Way Out

A ceasefire was signed in June, making it easier to get to an actual agreement. A FARC negotiator tweeted: "There is no room for winners or losers when you achieve peace through negotiations. Colombia wins, death loses."

The agreement creates a timeline for FARC to stop fighting, gives amnesty for all crimes committed and sets a pathway for fighters to make their way back into society, including potentially running for political office.

Both sides seem to be excited about the deal, but nothing is set in stone yet. Colombia's President Juan Manuel Santos still has to get a popular vote on the terms of the deal.

To put things mildly, this has been an extremely bloody war. More than 220,000 people have been killed, and more than 5 million have been displaced from their homes. And FARC has used kidnapped civilians to help fund its fight. So getting the public to sign off on the terms may take some work.

Especially as a political opposition to the deal led by a former president and members of the Colombian Congress grows. One senator told press: "They will spend zero days in prison, they will be awarded with political representation. This deal breaks the rule of law."

Santos has announced the vote will take place Oct. 2.