Anti-Immigrant Party Defeated The German Chancellor In Her Home State 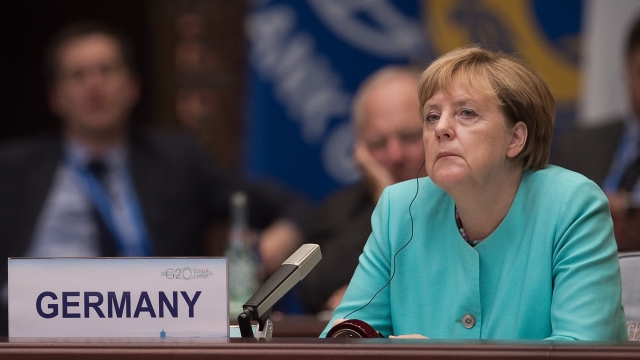 German Chancellor Angela Merkel got some bad news while attending the G-20 summit in China on Sunday.

In Germany, her party — Christian Democratic Union — came in third in her home state in the northeastern part of the country.

"We have to close or to protect our borders. People do not support this policy anymore," AfD Deputy Leader Beatrix Von Storch told Sky News.

Many view the AfD's second-place finish as a referendum on Merkel's refugee policy. Germany accepted over 1 million refugees in 2015. And Germans have been increasingly unhappy about it.

Merkel hasn't announced whether she'll run for a fourth term next year.  If she does, Sunday's results show she'll have a challenge on her hands.

The AfD's second-place finish in Merkel's home state is certainly a blow. The Social Democrats and Christian Democratic Union have governed the state for 10 years.

Even so, the AfD's victory on Sunday shouldn't be overblown. As The New York Times points out, it's a result in a state with 1.3 million voters. Germany's total population is over 80 million.

Bloomberg describes Merkel's home state as "an outlier," with 9 percent unemployment — another reason voters may have supported the AfD. The country's unemployment rate in August was 6.1 percent — the lowest since German reunification over 25 years ago.