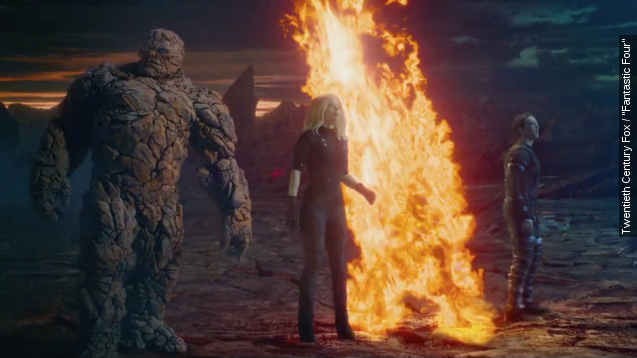 "Remember, science and fantasy aren't too far away from each other," Dr. Michio Kaku says in a "Fantastic Four" featurette.

20th Century Fox's promotions for the upcoming superhero flick "Fantastic Four" are turning heads by explaining the science behind the fiction in the film.

The studio has teamed up with renowned theoretical physicist Michio Kaku to create featurettes about the realities, and near possibilities, of the film's most fantastic elements — like alternate dimensions.

"An electron could have ended up anywhere. But only by noticing it did we pin it down to this reality. ... What about all the other realities that may coexist with ours? They vibrate at different quantum frequencies," Kaku says in a featurette.

"Metamaterials interact with light in bizarre ways. Here we see this Pyrex glass that seemingly disappears right before our eyes. The Pyrex and the oil have what we call, the same refractive index," Kaku says in a featurette.

Other scientists besides Kaku have long been trying to explain superhero phenomena. Physicist Neil deGrasse Tyson got a cameo in a Superman comic after identifying the real-life version of Krypton, Superman's home planet.

And a physics professor who volunteers at the National Academy of Sciences says it's in studios best interest to get some of the science right.

"They don’t want to make something that’s 100 percent scientifically accurate because that would defeat the purpose of the escapist fantasy we paid our money to see, but rather they need to get it right enough that the audience buys into and doesn't stop and question the suspension of disbelief," professor James Kakalios.

And science can make us not want a superpower. Wired magazine's calculations show the speed and strength of Spider-Man's webs would probably kill those he's trying to save. (Video via Columbia Pictures / "The Amazing Spider-Man 2")

Still, we have a lot to learn from our favorite superheroes –– even the ones as human as we are. (Video via Paramount Pictures / "Iron Man")

The Pentagon is developing suits with exoskeletons that would lift hundreds of pounds, helmets that sense hidden threats and liquid armor that hardens when struck by bullets.

If you're wondering, batteries are actually the biggest issue for real-life Iron Man suits. So far, they either last less than an hour or emit enough power for the suit-wearer to run only 2.5 mph.

It's ironic that we can make something invisible, yet can't create a long-lasting battery. But the real effect of the "Fantastic Four" featurettes might flip what we think of as "super" on its head.

You can check out all the featurettes on 20th Century Fox's YouTube channel.