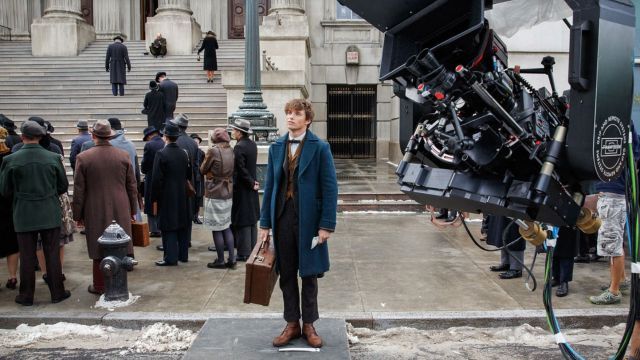 SMS
'Fantastic Beasts' Can't Match The 'Potter' Films But Nabs $75M Debut
By Jamal Andress
By Jamal Andress
November 20, 2016
"Harry Potter and the Sorcerer's Stone" brought in $90 million domestically in its debut, and that was 15 years ago.
SHOW TRANSCRIPT

Over the course of 18 years, Harry Potter's wizarding world sold nearly 450 million books, made $7.7 billion at the box office and spawned two theme parks. So yes, Warner Bros. made a spinoff.

Easily taking the No. 1 spot this week is "Fantastic Beasts and Where to Find Them," bringing in an estimated $75 million domestically in its first week out.

A $75 million debut is great by most standards, but for a franchise like "Harry Potter," the bar sits high — especially considering the $180 million budget.

"Harry Potter and the Sorcerer's Stone" brought in over $90 million domestically in its debut, and that was 15 years ago. "Fantastic Beasts" had the worst debut from the wizarding world — including all eight "Harry Potter" films.

SEE MORE: J.K. Rowling Says Harry Potter Is 'Done' — But We're Not So Sure

That said, let's not feel bad for Mr. Scamander or Warner Bros. It seems muggles across the pond haven't lost an ounce of their Potter enthusiasm, pushing foreign ticket sales past $140 million.

Perhaps the bigger surprise here is the collective sigh from some critics.

"The character of Newt Scamander is boring," said Matt Atchity on "What the Flick?!"

While moviegoers across the country are just excited that anyone is waving a wand on the silver screen — others say the adventures in New York just don't measure up to Hogwart's adventures. Luckily for us, Eddie Redmayne and J.K. Rowling have another four films to get everything just right.

Falling from the top spot for the first time since its debut is Marvel's "Doctor Strange," bringing in an estimated $17 million in its third week out.

And right behind "Doctor Strange" this week is "Trolls," also finishing up with about $17 million.

As for next week, Disney gets a Polynesian princess in "Moana."