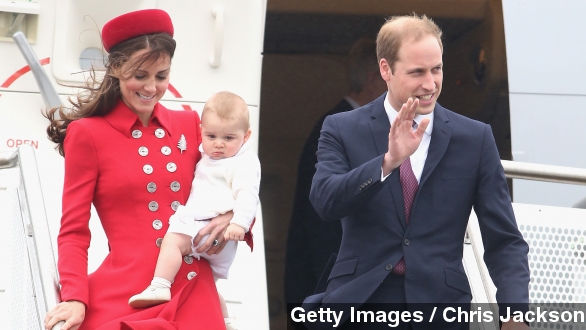 SMS
Fancy Meeting The Royals? It'll Cost You
By Katherine Biek
By Katherine Biek
November 24, 2014
For $100,000, Americans will have the chance to meet the Duke and Duchess of Cambridge at a charity event in New York City next month.
SHOW TRANSCRIPT

When the Duke and Duchess of Cambridge set foot in New York City next month, Americans will finally have a chance to rub elbows with the famous royals.

The catch? It's going to cost quite a bit of money. Probably a bit more than you usually keep in your wallet.

On Dec. 9, William and Kate will be attending a fundraiser for their alma mater, University of St Andrews, at the Metropolitan Museum of Art. For $100,000, attendees can reserve a VIP table for 10.

"That includes two VIP tickets that give you a chance to meet Will and Kate in person. I would hope more than a chance for $100,000!" ABC anchor Amy Robach said.

But for that much money, William and Kate aren't the only famous faces attendees have the opportunity to meet.

The Daily Mail reports Olivier Sarkozy, the French banker and half-brother to the former president of France, and his fiancee, Mary-Kate Olsen, will also be at the fundraiser.

With an expected attendance of 450 people, the event is almost sold out, according to the International Business Times.

But the fundraiser isn't the only big royal news this week.

A reporter for Politico called attention to the dress code journalists will have to abide by if they want the chance to sit down with William and Kate. The biggest takeaway: Leave those jeans at home.

As an E! reporter writes, it's just common courtesy: "To be fair, it's not like we see Prince William and Kate attending official engagements in worn and torn denim."

We're betting there won't be a pair of jeans in sight at the Met fundraiser in December. No one wants to end up on the worst-dressed list at an event where the royals will be attendance.