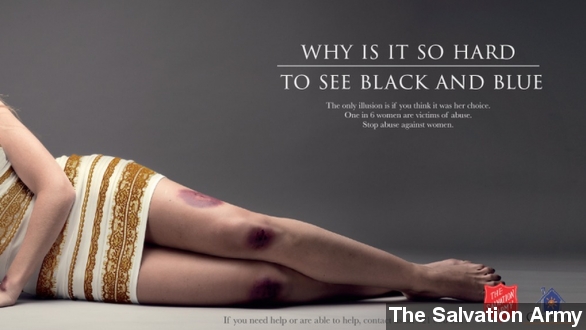 OK, really, it's more like the dress that launched 10 billion tweets. Blue and black? White and gold?

You thought it was all over when it was finally proved it was blue and black, didn't you? But no. It's back, but this time for a more substantial reason than messing with your eyes.

The Salvation Army has put a spin on the "black and blue" message — using the dress's popularity to spread the word about violence against women. This ad poses the question, "Why is it so hard to see black and blue?"

The ad, which comes from The Salvation Army in South Africa, features this statistic: "One in six women are victims of abuse."

It also says: "The only illusion is if you think it was her choice."

The Washington Post called the message "powerful," noting brands don't always make the "best decisions" about viral content, "But this time, it appears the Salvation Army stuck the right tone."

Next to the Salvation Army logo is a logo for a charity called Carehaven. The organization is run by The Salvation Army and offers short-term housing for women who have been abused, as well as their children. The charity has helped 5,000 women.

The administrator of Carehaven told BuzzFeed:

"To be very honest I think the more controversial the advert the better if it gets the message across!"

And just to bring this full circle, a gold-and-white version is on sale now, too. So, in the end, did the debate even really matter?

Well, it might now. The ad was retweeted thousands of time in just hours.