Family Uses Billboard To Find New Kidney For Their Dad 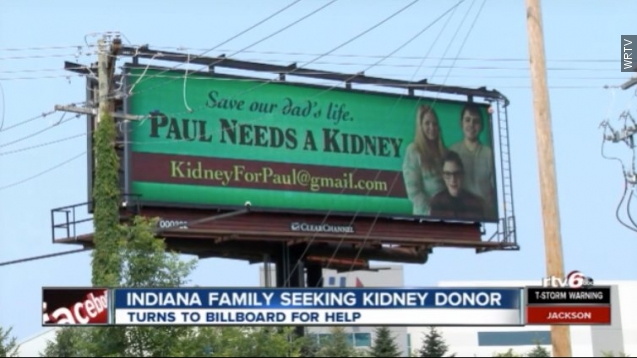 SMS
Family Uses Billboard To Find New Kidney For Their Dad
By Katherine Biek
By Katherine Biek
July 1, 2015
The DeSmith family is using a billboard in Indianapolis to find a person willing to donate a kidney to their father.
SHOW TRANSCRIPT

"The hardest thing is seeing him not be able to do the things that he likes to do," JoAnna DeSmith told WRTV.

JoAnna DeSmith's father, Paul, is currently on transplant list for a new kidney after he was diagnosed with kidney disease several years ago.

But none of Paul's family members were a match, and he's yet to receive a new kidney from any of the lists he's currently on. So the DeSmith family decided to get creative.

"So rather than wait, JoAnna and her family looked up. And now after getting a billboard company to donate some billboard time around Indianapolis, hope someone driving by will look up, too," a WRTV reporter said.

Newsy's partners at WRTV report while several people have reached out to the DeSmith's since the billboard was put up in June, the family is still waiting for a match.

According to a website about kidney transplantation, "The average waiting time for a kidney is three to five years, depending on blood type."

The National Kidney Foundation says there are currently more than 100,000 people in the U.S. waiting for kidney transplants. In 2014, about 17,000 Americans were successfully awarded a kidney — which sheds some light on why wait times are so long.

The DeSmith's billboard comes down July 7, so there's still time for someone to see it and donate a kidney to Paul.

"He's amazing! He's always there for us. He's been such a — He's just such a good role model," JoAnna DeSmith said.