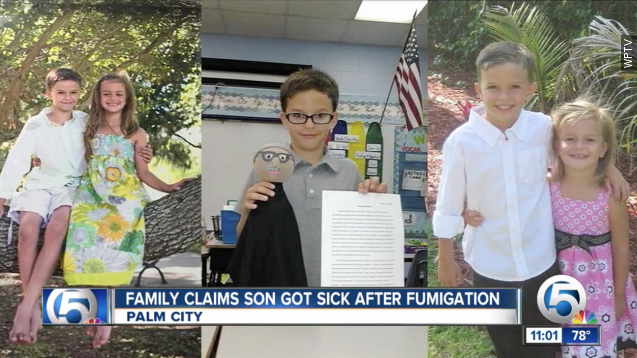 SMS
Family Says Child Was Poisoned By Termite Fumigation
By Newsy Staff
By Newsy Staff
September 4, 2015
A 10-year-old boy is unable to speak or move after his house was fumigated for termites.
SHOW TRANSCRIPT

A child in West Palm Beach, Florida, is unable to speak or move after his family says he was poisoned by termite fumigation.

Ten-year-old Peyton McCaughey's family was given the OK to return to their home after their house was fumigated, according to Newsy's partner WPTV. That night, the entire family got sick, but Peyton's symptoms didn't get better.

After nine days in the ICU, Peyton was transferred to a hospital in Miami.

As of Thursday, he had been in the hospital for 18 days.

The family says the company that did the fumigation refused to tell the family what chemicals were used, which they say could have helped doctors treat their son.

A spokesperson for the company released a statement that said, "We were saddened to learn of this and our hearts are with the family. We are carefully reviewing the matter."

The community where Peyton's family lives has rallied to support them. Peyton's mom is an assistant principal at the local high school, and her co-workers are donating their vacation days to her so she can be with Peyton.

The family has a GoFundMe page set up called Supporting Peyton McCaughey, which has raised almost $40,000.