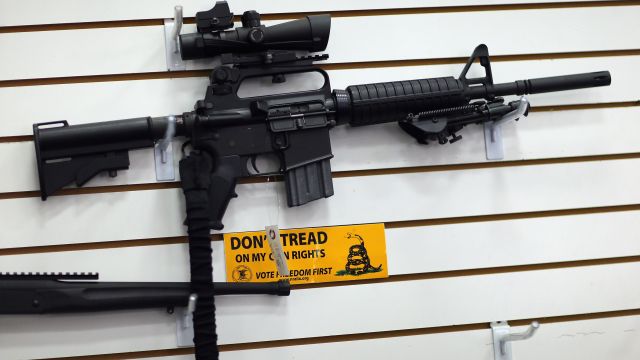 SMS
Family Of AR-15 Designer Says It Was Never Meant For Civilian Use
By Matt Picht
By Matt Picht
June 16, 2016
Eugene Stoner designed the AR-15 as a military weapon. His family says he didn't envision it in the hands of civilians.
SHOW TRANSCRIPT

Another high-profile mass shooting has put the AR-15 assault rifle at the center of America's gun debate — again. Now the family of one of the weapon's designers is speaking out.

The family of Eugene Stoner, the man credited with developing the AR-15 and its military counterpart the M-16, told NBC "his intent was that he designed it as a military rifle," not for civilian use. They also said he never owned one of his signature rifles, despite his fondness for sport shooting.

Despite initial reports, an AR-15 wasn't used in the mass shooting that killed 49 people at a gay nightclub in Orlando. But the weapon has become a stand-in for the semi-automatic weapons often targeted by gun control efforts.

And whether the AR-15 is a military weapon is important: A lawsuit leveled against a gun manufacturer by families of the victims in the Sandy Hook mass shooting hinges on defining the gun as a weapon of war inappropriately marketed to civilians.

That lawsuit still faces long odds, though. Gun rights groups have taken pains to distinguish the AR-15 from its military cousin, pointing to its lack of an automatic fire feature and promoting its use in hunting and sport shooting.