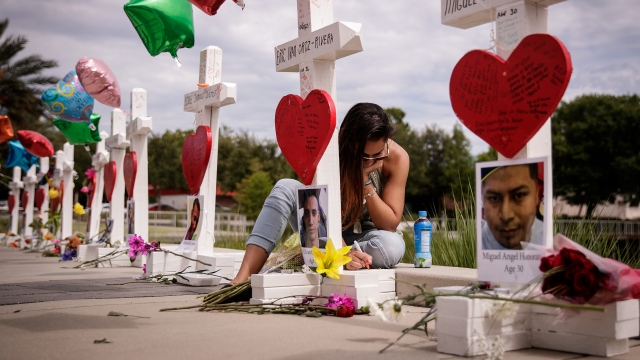 SMS
Families Of Those Killed In Pulse Nightclub Shooting To Get $350K Each
By Briana Koeneman
By Briana Koeneman
September 27, 2016
But according to the OneOrlando Fund, at least half of the deceased victims have loved ones fighting about how the claims should be distributed.
SHOW TRANSCRIPT

The families of the 49 people who were killed in the Pulse nightclub shooting will each receive $350,000 in donations raised for the victims of the attack.

That is, after they stop arguing over who gets that money.

An official with the OneOrlando Fund says at least half of the deceased victims have loved ones who are fighting about how the claims should be distributed.

The fund's distributor told the Orlando Sentinel, "We are already involved in a Battle Royale ... — biological parents vs. same-sex partners, divorced spouses demanding they get the money to the exclusion of the other spouse, siblings of the dead coming in claiming that a parent was absent ... or never had anything to do with the victim."

And if an agreement can't be reached, the cases will reportedly be sent to probate court.

As for the 37 survivors who were hospitalized following the massacre, OneOrlando will give them between $65,000 and $300,000 each, depending on the amount of time they spent in the hospital.

Another 31 injured people who received outpatient treatment will receive $35,000.

And the 182 patrons who were at Pulse during the shooting but weren't injured will get $25,000.

The head of the OneOrlando Fund's board of directors said in a statement, "While no amount of money will ever erase the horrific events of that day, we are hopeful support from the OneOrlando Fund will help victims and their families with the healing process."

Almost 150,000 people and companies from more than 120 countries helped contribute to the fund, which raised a grand total of $29.5 million.