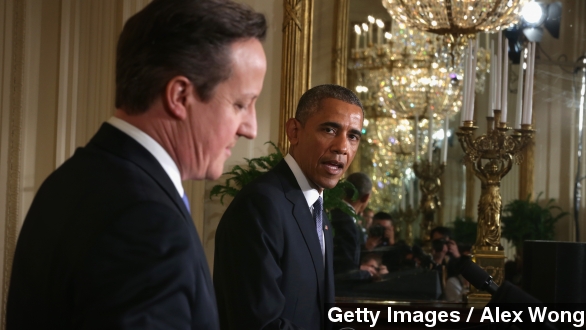 "This has metastasized, and it is widespread, and it has penetrated communities around the world," President Obama said.

"We do face a very serious Islamist extremist terrorist threat in Europe, in America and across the world," Cameron said.

It's been a week since gunmen attacked the headquarters of satirical magazine Charlie Hebdo. Al-Qaeda in the Arabian Peninsula officially claimed responsibility for the massacre, which left 17 people dead.

Both Obama and Cameron said there was no one answer to preventing attacks like those in Paris from happening again. Instead, a taskforce will explore solutions and report back later this year, making Friday's discussion largely symbolic.

Obama also touched on Cameron's pressure for the U.S. to allow the surveillance of potential terrorists through social media.

"We've been in dialogue with companies and have systematically worked through ways in which we can meet legitimate privacy concerns but also meet the very real concerns that David's identified. … Social media and the Internet is the primary way in which these terrorist organizations are communicating," Obama said.

President Obama warned Congress not to pursue any sanctions on Iran, saying sanctions would be detrimental to ongoing negotiations with the country.

"My main message to Congress at this point: Just hold your fire. Nobody around the world, least of all the Iranians, doubt my ability to get some additional sanctions passed if these negotiations fail," Obama said.

The leaders also agreed to maintain "strong sanctions" against Russia until it ends its aggression in Ukraine.