Falling Euro Could Be Bad For U.S. Economy 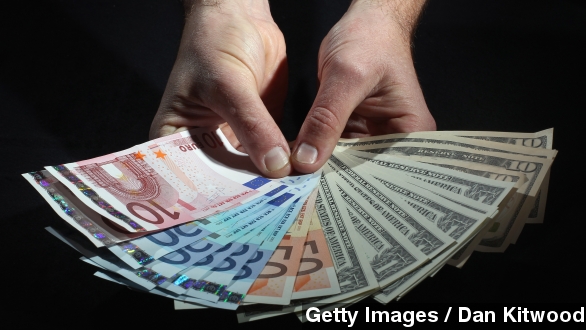 SMS
Falling Euro Could Be Bad For U.S. Economy
By Bram Sable-Smith
By Bram Sable-Smith
January 3, 2015
The euro fell to its lowest value since 2010, which could help Europe's economic recovery but could also take a bite out of demand for U.S. goods.
SHOW TRANSCRIPT

This week the value of the euro fell to its lowest level since 2010, equal to $1.20. And that could actually be bad news for U.S. companies.

And by many accounts, a decline in the euro's value was precisely what Draghi was trying to achieve.

As one analyst told The New York Times, "The euro is going to go down because it really needs to...The divergence between European and U.S. growth is very wide now." A weaker euro could change that.

As the value of the euro drops European goods become cheaper for Europeans, which will serve to bolster their sluggish economy. (Video via SNA Europe)

And while that's good news for European producers, it comes at the expense of their American counterparts. (Video via AutoMotoTV)

And some analysts believe that a dip in U.S. manufacturing in December is the result of the dollar's rising value against other currencies like the euro. (Video via The New York Times)

Others are more optimistic that domestic demand in the U.S. will keep American manufacturing strong.

One analyst, referring to higher employment rates, told The Wall Street Journal, "It is hard to believe that firms ramped up hiring if they were worried that conditions were weakening significantly."

One thing Europe is likely to import from the U.S. this year is central bank stimulus policy. Many analysts believe the European Central Bank – which represents the 19 eurozone countries – could implement a government bond buying quantitative easing program as soon as its next monetary policy meeting on Jan. 22.