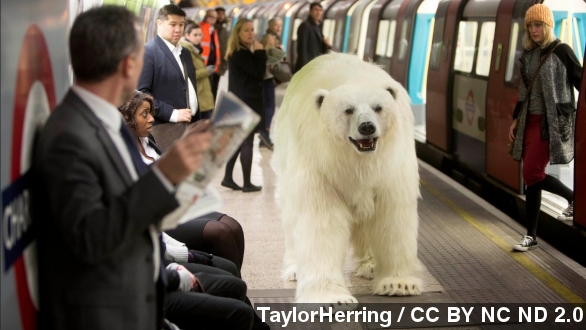 SMS
Fake Polar Bear On Streets Of London Is Quite The PR Stunt
By Katherine Biek
By Katherine Biek
January 27, 2015
Sky Atlantic created a fake 8-foot-tall polar bear to promote its new drama based in the Arctic Circle.
SHOW TRANSCRIPT

People in London were running for their lives Tuesday.

A polar bear on the loose. OK — an animatronic polar bear, but it's pretty realistic! (Video via ODN)

The UK's Sky Atlantic created the bear as a promotional tool for its new TV show "Fortitude," which is centered around a death in the Arctic Circle.

And it looks like once people realized the bear wasn't really ferocious, they didn't mind getting a little closer to it. Some whipped out their phones to snap a quick selfie, while others couldn't resist petting it.

To promote its 2013 "Carrie" remake, Sony teamed up with Thinkmodo to create a viral video showing a woman using telekinesis after a man spilled her coffee. It scared real-life customers and garnered millions of views. (Video via Sony Pictures Releasing / "Carrie")

And while social media has brought back the concept, it's not entirely new. To publicize the 1996 film "Independence Day," the filmmakers created a fake breaking-news alert that contained footage from the movie.

OK, so now it looks kinda cheesy, but WhatCulture reports some viewers were so terrified they called 911 after seeing the alert.

And one of the first-ever promotional stunts was all the way back in 1938, when an adaption of H.G. Wells' "War of the Worlds" was read on CBS Radio. (Video via PBS)

The Los Angeles Times reports some of the 6 million listeners really "believed aliens from the red planet had actually landed and overrun the small town of Grover's Mill, N.J., and were on the move through the rest of the country."