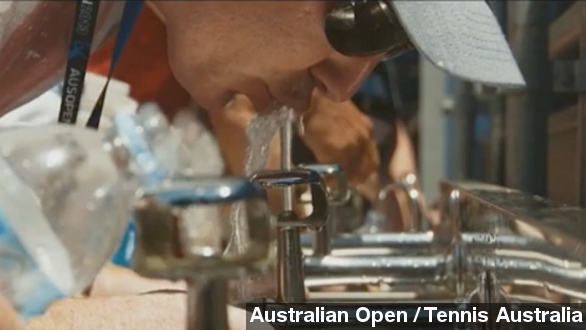 By Christian Bryant
January 14, 2014
Players and fans dealt with extreme heat as temperatures hit 108 degrees during day 2 of the Australian Open.
SHOW TRANSCRIPT

The unforgiving heat during the Australian Open led to a series of odd events Tuesday including withering competitors, melted items and at least one cartoonish hallucination.

This video shows spectators at the tournament taking refuge anyway they could while watching some of the world's best compete in temps up to 108 degrees, the hottest Open on record. But some the players on the court weren't so lucky. (Via Australian Open / Tennis Australia)

Take, for example, 29-year-old Canadian tennis player Frank Dancevic, who said he saw Snoopy just before collapsing mid-match against France's Benoit Paire. Dancevic commented on the hallucination saying, "I was dizzy from the middle of the first set and then I saw Snoopy and I thought, 'Wow Snoopy, that’s weird.'" (Via Metro)

He wasn't the only one visible affected by the heat. China's Peng Shuai reportedly vomited courtside and suffered from cramps during her match against Japan's Kurumi Nara. (Via CCTV)

While Caroline Wozniacki and Jo-Wilfried Tsongo survived their matches and the heat, the two dealt with a melted water bottle and melted sneakers, respectively. (Via Flickr / Christian Mesiano, Carine06)

American John Isner might've painted the most elaborate picture, comparing the heat on the court to the moment you open the oven and the potatoes are done.

A representative of Australia's Bureau of Meteorology said the extreme heat can be attributed to high maximum temps and above average minimum temps being sustained over a number of days, leading to "a build-up of ‘excess’ heat.” (Via The Washington Post)

According to ESPN, The Aussie Open has an extreme heat policy in place, which includes closing retractable roofs before or during play to shield players and fans from the sun. But it wasn't put into effect because humidity was too low.

The tournament's chief medical officer, Tim Wood, downplayed the heat, saying no players were in need of "significant medical intervention." He added, "The players don’t need to be warned about the weather ... It’s like you go to Wimbledon. You expect it to rain. You come to Melbourne and you expect it to be hot. ... We have never had anybody die from dehydration on a tennis court." (Via Sports Illustrated)

Those comments didn't exactly sit well with the players, including Andy Murray who said, "it only takes one bad thing to happen." However, the tournament will go on and the heat isn't expected to let up. According to USA Today, forecasts say temperatures might hit triple digits again in the next few days.