Facebook Wants To Be The Center Of Your Digital World 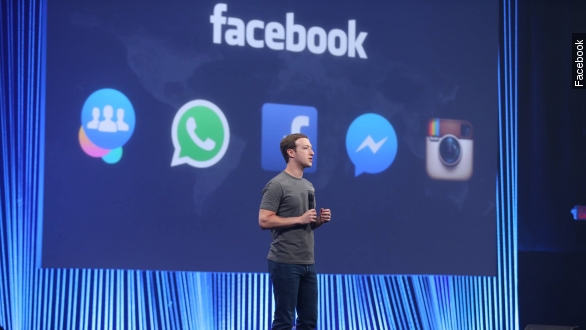 SMS
Facebook Wants To Be The Center Of Your Digital World
By Mikah Sargent
By Mikah Sargent
March 26, 2015
Facebook revealed a series of updates to its Messenger app and social network that could position the company at the center of your digital world.
SHOW TRANSCRIPT

Facebook’s annual F8 conference is underway, and the social media giant has already revealed the latest ways it plans to take over the world.

Well just the Internet, but you get the idea. Facebook announced a whole host of updates to its Messenger platform, and it’s clear the social media site wants to be the center of your digital world.

Its first move: Messenger Platform, its attempt to have you sending all your communications through Facebook Messenger by linking up with loads of other apps and services — especially those involving GIFs.

"I can actually have access to millions and millions of GIFs. In this case I want to share a fist bump with Mark, so I'm going to go and type 'fist bump' and then I have hundreds and hundreds of GIFs of cool fist bumps," said Vice President of Messaging Products David Marcus.

The company has already worked with more than 40 developers to offer Messenger integration.

Secondly, Facebook wants to be involved with your online orders. It'll do so by giving you the option to receive order updates, track packages and communicate with customer service all from within Messenger.

"We wanted to have businesses be first class citizens like people ... Everlane knows who I am, knows what I bought, has the context of the purchase because all of this exists in one canonical thread," said Vice President of Messaging Products David Marcus.

Lastly, Facebook is updating its social plugins to make it easier for users to share content to and from Facebook and the rest of the Internet. Its nearly ubiquitous 'Like' button will be joined by "Share" and "Send," and Facebook video can now be embedded on other sites. Have I used the phrase "center of your digital world" yet?

As a writer for BuzzFeed puts it, "[it's] a major sign that Facebook is encroaching on everyone from Google to Apple to Youtube, and even Twitter’s mobile analytics ... in its quest to become, at least on mobile, the entire internet."

Or, consider CNET's more sober observation: "Further expanding Messenger's skills could help raise Facebook's relevance among smartphone owners who have grown accustomed to downloading apps for all manner of capabilities, from snapping photos to playing games."

Either way, Facebook is very clearly stepping up to the Internet plate, and positioning itself as an all-in-one communication and connection platform.

Facebook's F8 conference is a two-day event, so there's bound to be more to see in the keynote on Thursday — especially with a title like, "Why Virtual Reality Will Matter to You." Tell me Zuckerberg, tell me why!