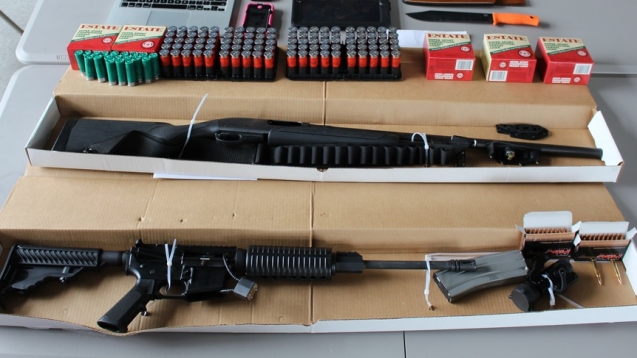 Boston Police say they were able to stop a "potential tragedy" at the Pokemon World Championships after arresting two men that drove there from Iowa. BPD says these weapons were found in a car the men were driving.

Kevin Norton and James Stumbo were charged with multiple firearm related charges after the championships' security was told about threatening posts on Facebook, who then told police. (Video via WBZ-TV)

This post from a public Pokemon page written by Stumbo shows the two guns police found in their car. The Daily Beast says Stumbo told police his post was taken out of context.

"It's hundreds and hundreds of kids here. And it's terrible. You don't know what's going to happen when you go out in public anymore," a witness told WFXT.

The Pokemon International Company released a statement praising the swift action of security, saying it, "takes the safety of our fans seriously and will continue to ensure proper security measures are a priority."

It's still not clear if the men actually planned to attack the tournament. Both will be in court Monday in Boston. (Video via NECN)

This video includes images from David / CC BY 2.0.