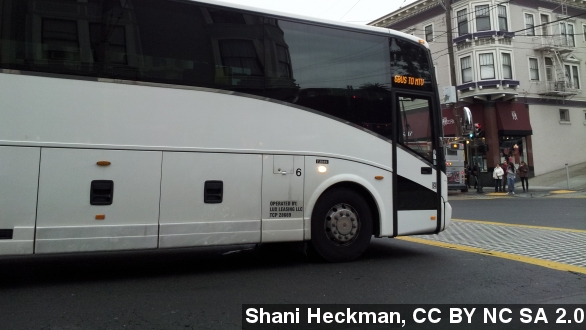 Facebook bus drivers voted Wednesday night to unionize, looking to get a better deal out of the long hours they spend shuttling tech workers around.

USA Today reports these drivers make somewhere in the neighborhood of $18-$20 an hour. In a place like San Francisco, it can be hard to make ends meet on that kind of money.

Their passengers, meanwhile, are most likely better off. PayScale says software engineers in the bay area make a little more than $101,000 a year, on average.

Teamsters union officials say their drivers deserve better than sleeping in their cars and working split shifts that keep them away from their families. (Video via KGO-TV)

The union’s VP and secretary-treasurer said in a statement, “Of all the industries in the world, the tech industry can afford to compensate those that help make them successful.”

For example: the union proposes better downtime accommodations for those drivers who work the morning and evening commutes. Something on the Facebook campus, maybe? There are definitely worse places to spend downtime. (Video via BBC)

The union move is the latest development in what has become a symbol of the cushy tech sector. Protesters targeted company buses from the likes of Google and Facebook earlier this year. (Video via CBS)

KPIX reports critics called out tech sector workers who contribute little to the communities they live in, while driving up costs of living for everyone else.

Facebook, incidentally, has so far not commented on their contactors’ move to unionize.