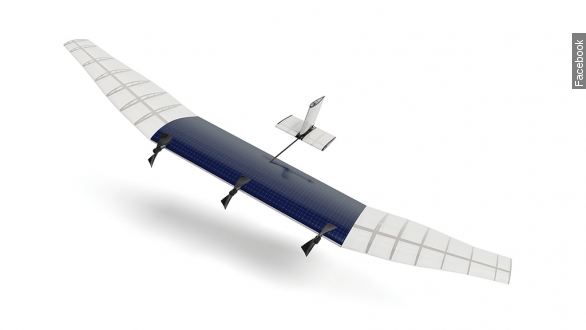 SMS
Facebook Building Plane-Sized Drones For Global Internet
By Mikah Sargent
By Mikah Sargent
March 27, 2015
Facebook on Thursday revealed more details about its Internet-connected drone project. The drone is bigger than a 737, but lighter than a car.
SHOW TRANSCRIPT

On day two of its annual F8 conference, Facebook gave us a little more information about its global Internet initiative.

"This is a picture of Aquila, our first prototype for our unmanned aerial vehicle. This is a solar-powered drone. ... the idea of this is to loiter across an area at very high altitude — 60 to 90,000 feet in the air — stand on station for months at a time, and beam down backbone Internet access," said Facebook CTO Mike Schroepfer.

With a wingspan greater than a Boeing 737, Facebook's Aquila is essentially a giant pair of wings. Unlike an airplane, however, it weighs only about the same as a small car. (Video via Air Transat)

It's an appropriate design for the name — in Greek mythology, Aquila was the eagle that carried Zeus's thunderbolts.

Aquila will remain at an altitude above that of commercial airspace and even weather. This allows it to spend months circling populated areas, broadcasting Internet to the ground. (Video via Internet.org)

During the keynote speech, the company revealed its estimations for the number of people living without Internet: between 1.1 and 2.8 billion people.

But why would Facebook want to use drones to broadcast Internet? Because it's complicated and expensive to bring typical mobile Internet to people.

"You have to secure land rights to install that tower, you have to have the tower itself with its equipment and so forth, you also need to be able to connect a cable or some type of microwave signal back to a place where you can get the actual Internet." (Video via Internet.org)

Even with the lower costs and less infrastructure, Facebook says it'll be a while before we see this project in earnest.

The Wall Street Journal quotes Facebook's vice president of engineering who said, "We are working towards a real test flight this summer sometime ... This is a big plane, this is a big project and it’s never been done before."

This video includes images from Facebook and Jehoshaphat Aspin.