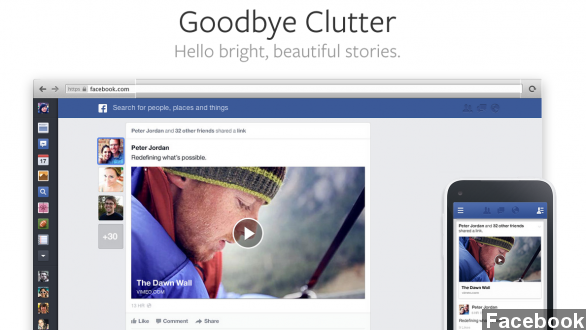 By Mikah Sargent
December 12, 2013
Facebook brings auto-playing video to the News Feed online and on your mobile devices.
SHOW TRANSCRIPT

​As many of you know, Facebook changes its news feed all the time. Occasionally it launches a new look or adjusts algorithms to bring you fresh information and popular stories.

The latest redesign promises to truly honor a content-first mentality with large images, maps, and article previews as well as auto-playing videos.

You heard that right — Facebook’s adding a little motion to your timeline with video that plays as you scroll. The feature is coming to Android and iOS via app update, and will make its way to the web soon.

Autoplay will only work for Instagram videos and those hosted on Facebook’s website. External links will still require that oh-so-difficult extra click or tap. And while video will play automatically, you’ll have to click or tap to hear the audio.

So how’s everyone reacting to the new feature?

John Brownlee of Cult of Mac is, well, not happy. While the videos don’t play sound unless you tap on them, there’s still a small problem with auto-playing video. “ … your device is sucking up bandwidth for videos you may very well (and, let’s face it, probably) have no interest in seeing.”

But The Verge says we needn’t worry about the whole “sucking up bandwidth” thing. Users can choose to set videos to autoplay only while connected to WiFi.

That’s good news, right? Well yes, but there could be more to this auto-playing video feature. TechCrunch says Facebook might be getting us used to an ad-filled future.

How do you feel about auto-playing video? Excited to see some motion in your news feed, or worried about those pesky advertisements? Let us know in the comments.