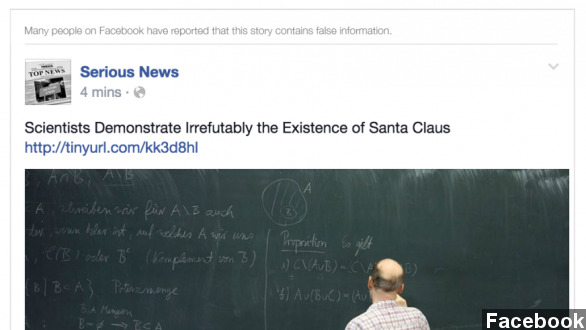 SMS
Facebook Asks For Users' Help To Reduce News Feed Hoaxes
By Evan Thomas
By Evan Thomas
January 21, 2015
Facebook's new hoax warnings will attach themselves to false or misleading stories in the News Feed, based on user feedback.
SHOW TRANSCRIPT

In a Tuesday blog post, Facebook engineers explain the network will start adding disclaimers to potentially misleading stories, based on feedback from users.

"We are not removing stories people report as false, and we are not reviewing content and making a determination on its accuracy."

But if enough users report it as false, the story "will get reduced distribution in News Feed."

Facebook says satire won’t be affected, meaning headlines like this one will still make it through. Of course this requires readers recognize it as satire.

In any case, the move is bringing a common debate back up: Who knows what's best for users? (Video via Facebook)

And how much trust should we place in Facebook's algorithms to make those kinds of decisions?

One contributor for Forbes writes, "Facebook is taking a bit of a risk here, once again teetering along the tightrope of balancing what it thinks users want against its own need to be seen as a platform rather than a publisher."

Wired writes when it "reduces distribution" on a given story, Facebook "calls attention to the fact that the News Feed is not neutral. Facebook has not only an ability but an interest in exerting control over what you see and click."

And there's the other side of that coin, as some writers suggest on Twitter. Ceding editorial direction to the masses might not be the brightest idea.

Facebook, at least, appears ready to trust its userbase. The update went live on Tuesday. You should see the new feedback in your reporting options.