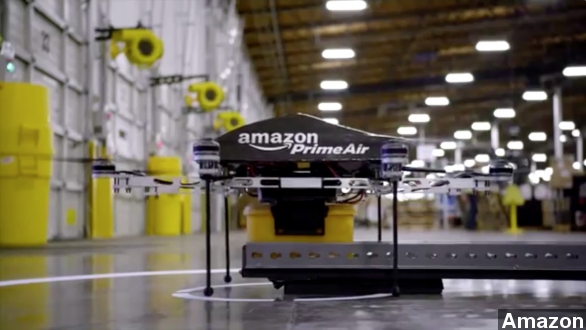 More than a year after Amazon pulled back the curtain on its ambitious drone delivery program, the company is finally getting the go-ahead from the government to fly its drones in U.S. skies — for testing purposes, at least.

The Federal Aviation Administration announced Thursday they have granted Amazon an experimental airworthiness certificate which will let the company conduct drone flights for R&D and training purposes.

It's the latest step in the FAA's long journey towards developing rules for commercial drone use. Back in February, the agency released its proposed rules to regulate drone use after coming under a lot of industry pressure — including threats from Amazon to take its drone delivery business abroad.

But the FAA's approval comes with a lot of strings attached. Amazon can't fly its drones over 400 feet, or out of the pilot's line of sight. The drone's operator has to have a private pilot's license at minimum. And Amazon will have to provide monthly reports to the FAA on their drone experiments.

A lawyer who specializes in drones told Forbes the FAA's approval was "some progress for Amazon specifically, but it's still limiting for innovating companies in general. ... It would require those companies that are innovating rapidly and forcing them to seek approval for every tweak they’re testing."

And don't expect to see Amazon's delivery drones on your doorstep anytime soon. The FAA's proposal for general drone regulations is expected to take anywhere from 18 months to two years to be finalized.