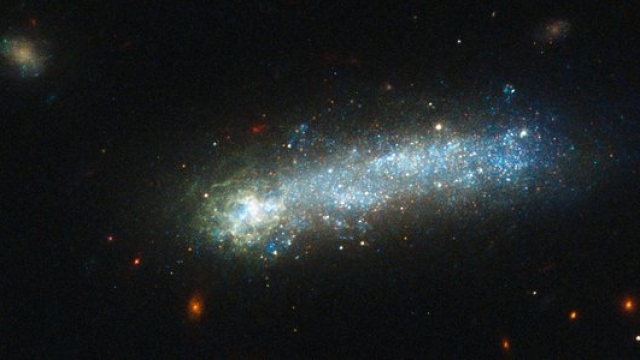 SMS
Extremely Rare Galaxy Sheds Light On How Others Get Their Shapes
By Ryan Biek
By Ryan Biek
June 29, 2016
Meet Kiso 5639. It's a tadpole galaxy.
SHOW TRANSCRIPT

The Hubble Space Telescope has captured images of an extremely rare galaxy researchers are using to learn how others, and their shapes, evolved.

While most galaxies are shaped like a spiral or elliptical, these "tadpole galaxies" researchers are studying have bright heads and long tails.

The odds are about 500-1 of a galaxy being tadpole-shaped in our neck of the universe. But Kiso 5639 beats the odds –– a relatively nearby tadpole galaxy just 82 million light-years from the Milky Way.

Its odd appearance comes from a frenzied birth of stars on one side of the galaxy. Stars in the "head" were formed just a million years ago, compared to other stars in the same galaxy which are a few billion years old.

As to what caused this rapid birth of young stars, researchers in Germany believe a narrow strip of gas entered the galaxy's atmosphere. That gas dropped matter, which folded in with clouds of dust to create stars.

But Kiso 5639 likely won't look like a tadpole forever. The researchers note that galaxies rotate and parts of the tail will eventually interact with that same strip of gas, leading to more stars being born.

You can read a more detailed account of Kiso 5639 and the makeup of its gas stream in The Astrophysical Journal.