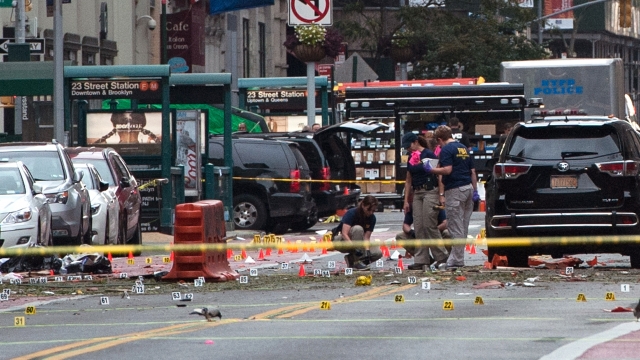 "I want New Yorkers to be confident when they go back to work on Monday that New York is up and running and we're doing everything we need to do," Andrew Cuomo said at a press conference.

A bomb believed to be in or around a dumpster went off around 8:30 p.m. Saturday.

Police inspected the surrounding area for other explosive devices. They found another — which hadn't detonated — about four blocks from the site of the explosion.

While Cuomo said the explosion Saturday night was an act of terror, he also said there is no known imminent threat to the city. The governor seemed pretty calm considering the explosion caused what he described as "significant damage."

But even shortly after the explosion, New Yorkers seemed relatively calm. Some even tweeted that the media and people not in New York were the ones freaking out.

Cuomo said the devices do not appear to be the same as the pipe bomb that exploded inside a trash can at a military charity run in New Jersey on Saturday morning. But he said he and New Jersey Gov. Chris Christie are coordinating resources to investigate the incidents. No one was injured in the New Jersey explosion.

Cuomo also said there's no evidence to suggest Saturday's events are tied to one in July when a device exploded in Central Park, injuring an 18-year-old.

The devices recovered Saturday are being sent to the FBI lab in Quantico, Virginia, for analysis.

By Sunday morning, all 29 people injured in the Chelsea explosion had been released from the hospital.

"When you see the amount of damage, we really were very lucky that there were no fatalities," Cuomo told reporters.

As of midday Sunday, investigators had not named any suspects. Cuomo said the New York explosion did not appear to have links to international terror.