Extended MLB Netting Could Be New The New Norm 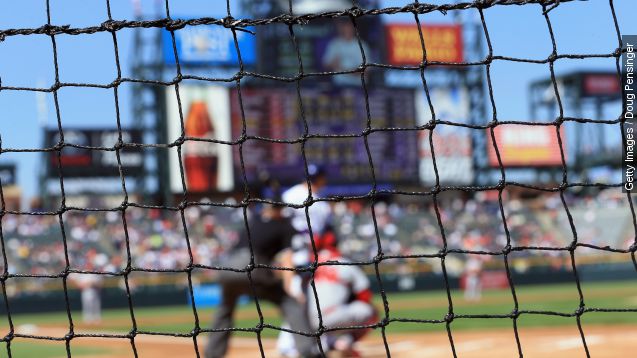 SMS
Extended MLB Netting Could Be New The New Norm
By Matt Moreno
By Matt Moreno
December 9, 2015
MLB is encouraging clubs to extend protective netting after a string of incidents in which fans were injured by balls or bats flying into the stands.
SHOW TRANSCRIPT

Walking back to your front-row seats with an armful of food and beverages might soon be easier and safer at baseball games.

MLB announced Wednesday it is now recommending teams extend nets or protective screens near those front-row seats to the end of both teams' dugouts and within 70 feet of home plate.

All 30 MLB teams have some sort of protective netting in their stadiums installed directly behind the backstop, but those nets usually end at or before the beginning of the dugouts. This non-mandatory suggestion would extend those much farther down the line.

This comes after a string of incidents this year in which screaming foul balls or shards of broken wooden bats flew into the stands and injured spectators.

While baseball fans who love the thrill of dodging foul balls left and right might gripe if their club installs these nets, that opposition should wear itself out.

Much to the chagrin of some fans, the NHL added nets to arenas in 2002 after 13-year-old Brittanie Cecil was hit by a puck during a Columbus Blue Jackets game. She died two days later.

But as Yahoo! Sports wrote in 2012, 10 years after the net installations: "The netting has become such an assumed part of the fan experience. ... The purists bristled at the end of a tradition. Debates raged … and then a decade later, yesterday's hot-button debate is today's societal norm."

But it still doesn't answer another question MLB's been faced with — fans falling to their deaths at the stadiums.

So far, there have been no reports of fans being killed by foul balls, but with major leaguers getting stronger by the day, many have called for an extension of protective nets before that becomes the case.

MLB says it is working with online ticket retailers to notify fans what seats will and won't be behind netting.