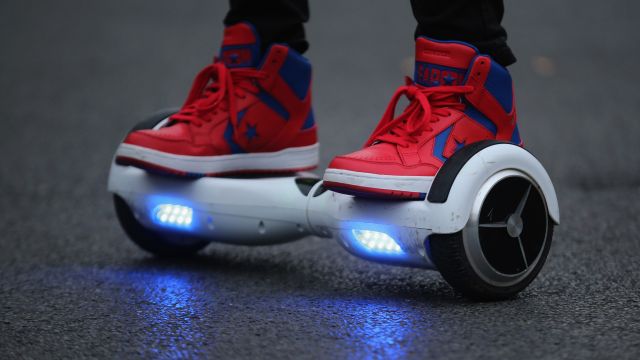 SMS
Exploding Hoverboards Are Finally Getting Recalled By The CPSC
By Matt Moreno
By Matt Moreno
July 6, 2016
The U.S. Consumer Product Safety Commission issued a recall of more than 500,000 hoverboards.
SHOW TRANSCRIPT

The hoverboards are fire hazards and pose risks to consumers' safety, according to the CPSC recall. More than 500,000 hoverboards are affected. CPSC's chairman spoke exclusively to ABC about the recall.

"This is a huge recall. It's the recall I think we've all been waiting for to address this product that as soon as it came on the market presented a pretty significant fire hazard," CPSC Chairman Elliot Kaye told ABC.

Over half the products recalled are from Swagway, a hoverboard manufacturer that told consumers in mid-February to stop using its products because they weren't safe, but walked that statement back just a few days later.

Ever since the rolling hoverboards started getting popular last year, many customers have documented them suddenly exploding.

"I came down the sidewalk, not even maybe 100 feet, and it exploded. It went BOOM!" Timothy Cade told WKRG.

The CPSC said in December that even though the fire hazard had gotten most of the attention, the risk of injury from falling off one of the boards could also cause serious injury.

In all, hoverboards from 10 companies are being recalled.

This video includes clips from the U.S. Consumer Product Safety Commission and images from Getty Images.