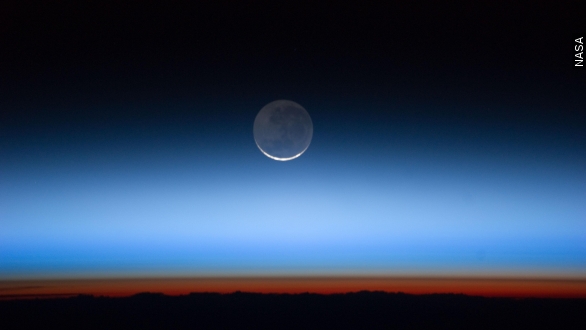 SMS
Examining Earth's DNA Supports New Origin Theory For Moon
By Evan Thomas
By Evan Thomas
April 9, 2015
Countering a past theory, a new study suggests the object that collided with Earth to form the moon actually had a similar composition.
SHOW TRANSCRIPT

We don't know exactly how the moon started orbiting our planet.

The "giant impact" hypothesis has been a prevailing theory since the 1970s: It's thought some stellar body, about a tenth of the weight of Earth, rammed into the forming planet and knocked enough debris free to form what would eventually become the moon.

The theory held this early impact body would have a different chemical composition than Earth because we've seen the trait in other planets and planet-like masses in the solar system.

But a new study from researchers in Israel and France suggests the impact body was very similar, materials-wise, to Earth. Author Hagai Perets spoke to Nature:

A writer at Space.com says it's not totally unreasonable. The composition of protoplanets depended in large part on where they orbited in the solar system.

"The scientists found that as each planet assembled, the last protoplanet to collide with it probably shared a similar orbit. Thus, protoplanets that share similar birthplaces can also share a similar composition."

And this ties conveniently into other recent research. Two new investigations into moon rocks in the U.S. and Germany detail the "late veneer" hypothesis,

which states after the impact that formed the moon, both it and Earth collected a layer of additional material in the form of meteorite impacts. The greater mass and gravity of Earth suggests it should have a larger collection, which it does.

But analysis from both of those studies shows Earth and the moon were chemically similar before gathering their meteorite layers, a finding that both challenges older models of Lunar formation and lends support to the newest version.

All three studies are published in the journal Nature.

This video includes images from NASA and music by Thomas Prime / CC BY NC SA 3.0.