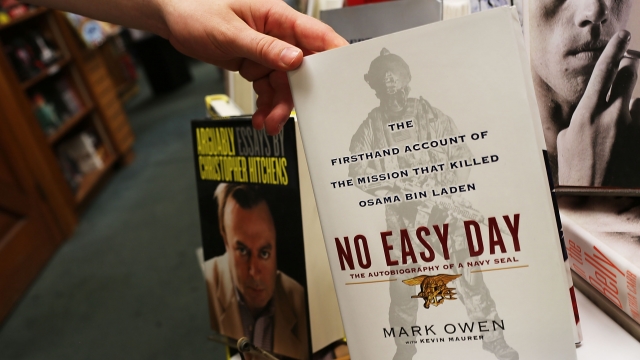 SMS
Ex-SEAL Team 6 Member To Forfeit All Royalties From Bin Laden Book
By Grant Suneson
By Grant Suneson
August 20, 2016
Matt Bissonnette, who wrote a book about the raid to kill Osama Bin Laden, has to give all royalties to the government because the book wasn't vetted.
SHOW TRANSCRIPT

A former Navy SEAL Team 6 member will have to give the U.S. government millions of dollars in royalties from a book he wasn't supposed to publish.

Matt Bissonnette wrote the book "No Easy Day" under the pseudonym Mark Owen. The book chronicles the famous raid that killed Osama bin Laden in Abbottabad, Pakistan, back in 2011.

The problem is that Bissonnette failed to clear the book with the Department of Defense even though he signed a non-disclosure agreement while serving.

There were concerns that the book contained some classified information, which could have resulted in jail time. The Justice Department decided against any criminal charges, but Bissonnette isn't getting away unscathed.

Friday, he agreed to return the $6.7 million in royalties the book netted him since its release. He also had to forfeit $100,000 in speaking fees for using unapproved slides in his appearances.

As part of the agreement, Bissonnette admitted he made a mistake, saying, "I accept responsibility for failing to submit the book for review and apologize sincerely for my oversight."

His attorney said other officials have worked on similar projects and as consultants for the film "Zero Dark Thirty," but only Bissonnette was fined.