Ex-Peanut Exec Gets 28 Years In Prison For Salmonella Case 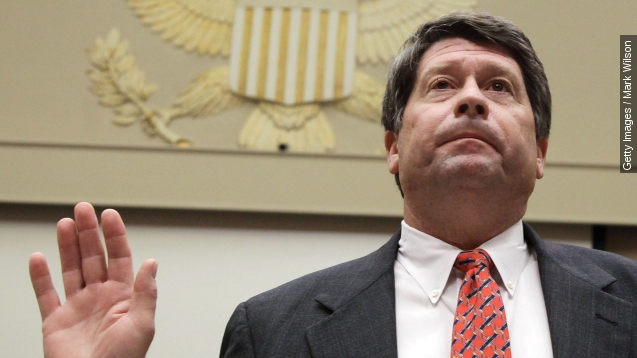 A former peanut company executive will spend nearly three decades behind bars for crimes related to a nationwide salmonella outbreak that killed nine people back in 2009.

A federal judge in Georgia sentenced ex-Peanut Corporation of America head Stewart Parnell to 28 years in prison Monday after a jury found him guilty on more than 70 felony counts last year, including knowingly shipping tainted food across state lines. (Video via C-SPAN)

Legal experts are calling the sentence the most severe in U.S. history in a U.S. food-safety case. But family and friends of the victims say they believe the punishment fits the crime. (Video via WALB)

Cameras weren't allowed during the sentencing, but one reporter from WFXL tweeted out their reactions from the courtroom.

He quoted several family members as saying, "Just ship him to jail already," "You took my mom" and "The salmonella had just ripped her insides apart."

But still, others attended the sentencing to defend Parnell's character.

His mother, daughter and son all spoke of his "special" passion for his job and claimed he "has a heart to always put others before himself."

Parnell's brother, Michael, and a former quality control manager at the company were also sentenced to prison Monday for their roles in the crimes.