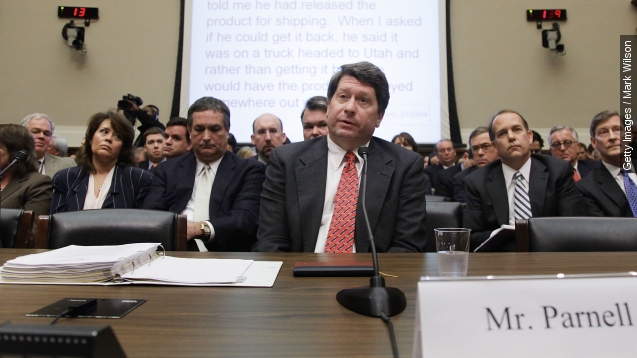 If federal court officers have their way, Peanut Corporation of America's former owner Stewart Parnell could be getting life in prison.

In September 2014, he was convicted of knowingly selling massive amounts of salmonella infected peanut butter to food processors. That conviction stemmed from one of the largest food recalls in the country's history that lasted from 2008 through 2009. (Video via C-SPAN)

The Justice Department wrote, "Expert evidence at trial showed that tainted food led to an outbreak in 2009 with more than 700 reported cases of salmonella poisoning."

The Centers for Disease Control and Prevention also linked the contaminated peanut butter to at least nine deaths.

But the severity of the outbreak and the loss of life hasn't kept lawyers from both sides of the trial from telling the Associated Press that the suggested punishment goes too far.

The 61-year-old Parnell has a sentencing date set for September 21 in Albany, Georgia.

This video includes images by Getty Images and Denise Krebs / CC BY 2.0.