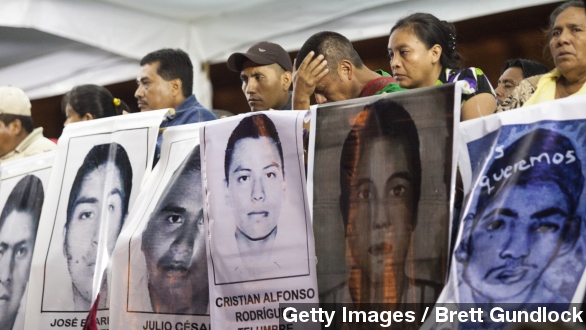 SMS
Ex-Mayor Charged In Missing Mexico Students Case
By Jake Godin
By Jake Godin
January 14, 2015
The former mayor of Iguala, who's been jailed since November, has been charged in the kidnapping of 43 students who disappeared in Mexico September.
SHOW TRANSCRIPT

Authorities have charged the former mayor of Iguala, Mexico, the southwestern town where 43 students disappeared in September last year, in the students’ kidnapping.

The head of criminal investigations for the Mexico attorney general's office announced Tuesday authorities had an arrest warrant for Jose Luis Abarca and dozens of other suspects in the case.

In December one of the 43 students was identified among incinerated remains in a remote dump. The others are believed to have suffered a similar fate after being attacked by Iguala police officers.

The state alleges the former mayor and his wife, Maria de los Angeles Pineda played a role in the kidnapping by allegedly ordering the police to prevent the students from disturbing a speech his wife was giving.

Both Abarca and Pineda have been in prison since last November after they were discovered hiding in Mexico City. The BBC reported Monday that Maria will be tried on suspicion of being involved in organized crime.

José, on the other hand, faces a slew of other charges including organized crime, separate kidnapping charges and homicide. (Video via Univision Noticias)

The students’ disappearance has heightened anger over government corruption in Mexico. Both peaceful and violent anti-government protests have swept the country.

The investigation into the students who remain missing is ongoing.