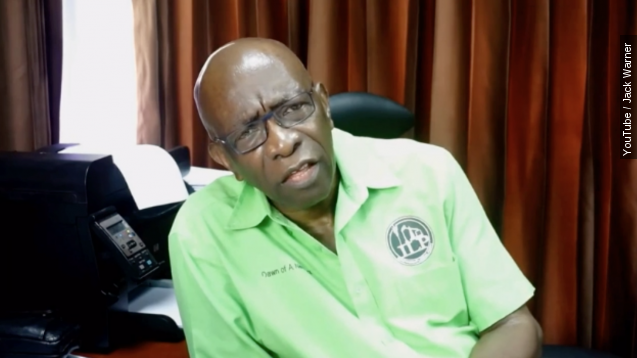 SMS
Ex-FIFA Official Falls Victim To The Onion
By Matt Picht
By Matt Picht
May 31, 2015
Ex-FIFA official Jack Warner committed an Internet faux pas when defending himself from corruption charges — he cited The Onion as a real news source.
SHOW TRANSCRIPT

Ok, time for a public service announcement. See this green logo? That belongs to The Onion, a satirical news website which — and this is important — doesn't report actual news.

So when you post a YouTube video defending yourself from corruption and conspiracy charges, it's not a good idea to cite one of The Onion's fake stories.

"If FIFA is so bad, why is it that the U.S.A. wants to keep the FIFA World Cup? Why is it that they begun games on May 27?" ex-FIFA official Jack Warner said. (Video via Deadspin)

That was former FIFA executive and Trinidad and Tobago politician Jack Warner, who is currently facing an indictment along with 13 other executives connected to FIFA. The U.S. Department of Justice accuses those defendents of "racketeering, wire fraud, and money laundering conspiracies, among other offences."

Warner's case doesn't look good; he was repeatedly accused of corruption during his term as the head of FIFA's North American region, and he eventually stepped down during a corruption scandal in 2011. Two of Warner's sons have already pleaded guilty to related charges from the DOJ.

To combat the charges, Warner cited this Onion article titled "FIFA Frantically Announces 2015 Summer World Cup In United States" as evidence of U.S. hypocrisy. The article goes on to report the next World Cup logo will be "a hand-drawn stick figure kicking a soccer ball with 'USA 2015!' hastily scribbled in black marker above its head." Seems legit, right?

Yeah, the article in question was lampooning FIFA more than the U.S. The Onion has been having a field day with the corruption case at FIFA's expense.

Of course, Warner's hardly the first person to fall victim to a hoax story, but it's been a while since The Onion's snared such a high-profile target. These days, it's The Onion's viral sister site Clickhole that's doing most of the high-profile duping.

After the mistake was noted and mocked online, Warner's video was briefly taken down, and then reposted with all mentions of The Onion scrubbed. The unedited video is still up on Deadspin, among other outlets.