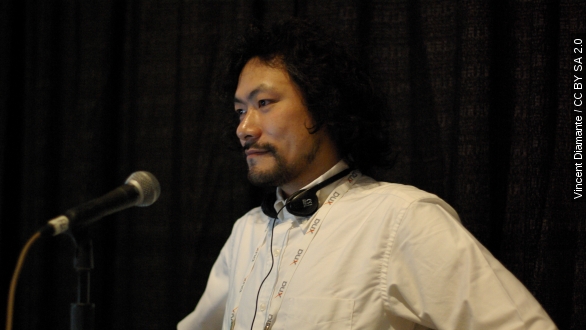 When you're setting out to raise half a million dollars on Kickstarter, there's no point in being subtle about it.

The man behind those bats is Koji Igarashi, the Japanese game developer credited with revitalizing the "Castlevania" video game franchise.

Now, he's successfully Kickstarted a spiritual successor for the franchise — and he's got some dire predictions for the future of his former employer Konami.

Igarashi's most famous work is 1997's "Castlevania: Symphony of the Night," which took the original whip-cracking, vampire-slaying 1986 adventure for the NES and expanded it into a sprawling, nonlinear exploration game for the Playstation. Igarashi's work on the game spawned a slew of successful sequels and influenced an entire genre of similar exploration games.

But when publisher Konami rebooted the franchise in 2013, Igarashi was sidelined and told to work on mobile games instead. After mounting frustration with the company, Igarashi left it last year.

Since his departure, Konami's appetite for big-budget console video games has continued to decline. The company recently cancelled a reboot of its "Silent Hill" horror franchise, and its all but been confirmed that high-profile game designer Hideo Kojima is on his way out of the company.

In a series of press interviews for his Kickstarter launch, Igarashi basically said what fans already suspected: the vaunted games publisher is moving away from console games to focus on more profitable ventures.

He told Wired, "Two, maybe three years ago ... Konami had slowly shifted its culture, as well as its business model. They started to have major success in the mobile space, and that was starting to be seen by the company as the future."

And when IGN asked him to comment on Kojima's exit, he said, "Konami is a corporation and they naturally and organically chase money. ... Their casino and sports club business … that's organically what makes them money." (Video via IGN)

His new project, "Bloodstained: Ritual of the Night," isn't much more than a handful of concept art sketches at the moment, but it's already almost doubled its funding goal.

Interestingly, the studio tapped to develop "Bloodstained" — Inti Creates — previously developed "Mighty No. 9," which is another Kickstarter game, by the developer of another beloved Japanese franchise, after he was also sidelined by his publisher. So, at least this new project's in their wheelhouse.

This video includes an image from Vincent Diamante / CC BY SA 2.0 and music from Podington Bear / CC BY NC 3.0.