Everything You Need To Know About The 1st MLK Biopic 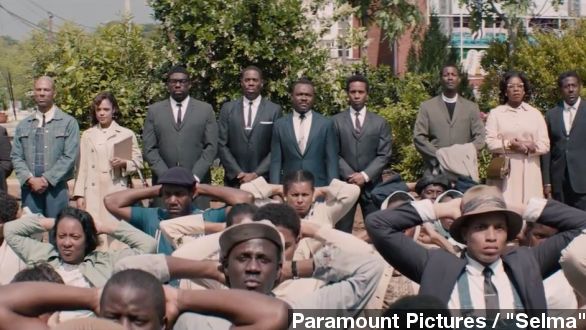 SMS
Everything You Need To Know About The 1st MLK Biopic
By Jamal Andress
By Jamal Andress
November 11, 2014
Now that MLK finally has the biopic he deserves, how will it stack up against other civil rights films like "Malcolm X"?
SHOW TRANSCRIPT

One of the most important leaders of the civil rights movement and definitely the most famous man in Black history does not have a major movie.

It seems like a no-brainer: Malcolm X, Jackie Robinson, Jimi Hendrix, Ray Charles, Muhammed Ali and even Biggie all have biopics, but no such luck for Mr. I Have A Dream – until now.

"It is unacceptable that they use their power to keep us voiceless."

It covers the months of MLK's life leading up to 1965's passage of the Voting Rights Act.

More specifically, the march from Selma to Montgomery, Alabama that many feel was the catalyst to LBJ giving Blacks the right to vote.

So now that MLK finally has the biopic he so rightly deserves, how's it gonna do? As for reviews of "Selma," so far — there aren't any.

But critics are mostly positive about the trailer. Hitfix writes, "It's an invigorating 2 1/2 minutes that excellently encapsulates the film's major focus."

But, as many do with the men themselves, these biopics always beg comparisons. How will "Selma" measure up to "Malcolm X"?

It's what many consider Denzel Washington's best performance on screen and Spike Lee's most prominent work.

Lee and Washington had worked together before — on "Mo' Betta Blues" — similarly with "Selma" David Oyelowo, who plays MLK, and director Ava DuVernay have had success together in the past. (Video via African American Film Festival Releasing Movement)

"I don't know what's happening next."

"I'm gonna try to be what's happening next."

"Middle of Nowhere," which stars Oyelowo and is directed by DuVernay, won the 2012 Best Director Award at the Sundance Film Festival, making DuVernay the first African American to win the award.

As for Oyelowo – he doesn't necessarilly have the star power that many might expect for such an important flick but as he told The Daily Beast, that's by design. (Video via ScreenSlam)

"I truly think a long career is to keep the audience guessing and not being able to be boxed. ... I’ve turned some stuff down that probably would have made me more well-known quicker, but I’m in this for the long haul."

The movie is set to get a limited release Christmas Day, then a nationwide release MLK Day weekend in January. Some will be able to get their first taste of the film much sooner though.

During a casual conversation on Twitter between DuVernay and Oprah the ladies seemingly decided right then to show the film in its entirety Tuesday at the American Film Institute Film Festival.

And we're assuming they're gonna go ahead and go through with it because, as Oprah put it, they "just told a lot of people."