Everyone Wants To Fight Conor McGregor 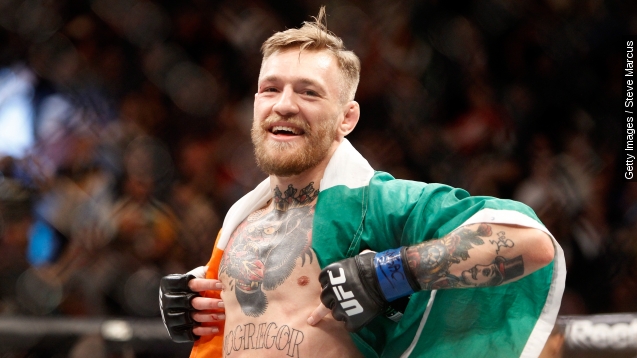 Well, we're not 100-percent sure yet, but there's no shortage of contenders chomping at the bit to take on the Irishman.

That was 155 pounder Nate Diaz who, after his surprising win over Michael Johnson, joined 155 pounder Rafael dos Anjos and 145 pounder Charles Oliveira in calling out McGregor on Saturday.

Dos Anjos said, "Conor McGregor, if you want to come to the lightweight division, know that this is my division. You should stay at featherweight."

At featherweight, there's no shortage of options as fellow featherweight Frankie Edgar went on Instagram to demand a shot at McGregor.

And, of course, there's a possibility of a rematch with Jose Aldo, the one who McGregor dropped in 13 seconds Dec. 12. (Video via SB Nation)

Of the many names looking for a chance at McGregor, dos Anjos seems to be the one with the best shot. McGregor's head coach John Kavanagh has said McGregor's looking to move up to lightweight in April and especially had his eye on the dos Anjos fight.

Kavanagh wrote in The42 this prior to Saturday's fights, "If Frankie Edgar wants a shot at the featherweight title or Aldo wants a rematch, we're fine with that too. But they’ll have to wait, because that lightweight belt is next on the agenda."

This video includes images from Getty Images and Rhdesantana.