Everyone Wants Apple To Save The Music Industry 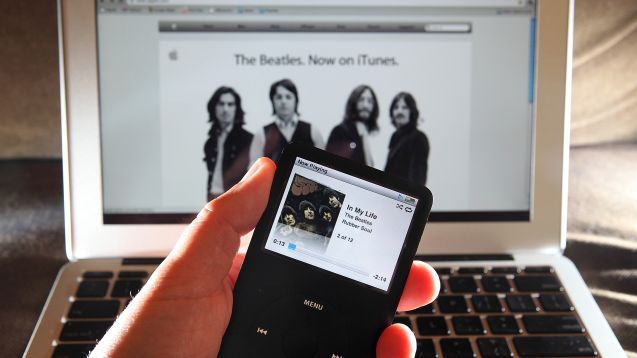 SMS
Everyone Wants Apple To Save The Music Industry

By Ben Lawson
June 6, 2015
No one knows what an Apple streaming service will look like yet but everyone is already predicting it will save the music industry because it's Apple.
SHOW TRANSCRIPT

We haven't even gotten an official look at Apple's music streaming service yet but it already has a big weight on its shoulders.

It seems like everywhere you look a different site is speculating if Apple's service will be the music industry's second coming - something that will finally stop the downward spiral of the industry's profits.

Apple has swooped in to save the music industry before. Back when Napster and online piracy came about, Steve Jobs and crew dropped the iPod and the iTunes store. Those two things made downloading music easy and legal for users while creating a new avenue of profit for record companies.

The struggle is this: people have now grown accustomed to streaming music instead of owning it, and there just isn't a lot of money in that business model ... yet.

The hope is that Apple can show up and change the game — again. But what will it do that the others haven't?

Well, first off Apple is probably going to have nothing to do with a free, ad-supported model. The company will likely have some kind of free trial but it's expected you will have to shell out $10 a month if you want to keep listening to Apple Music.

Making people pay is obviously a good start but people are used to streaming for free. Spotify has 45 million free users compared to its 15 million paid users. Which doesn't sound all that terrible until you look at the $30 million it lost last year.

So making users pay will do something the industry likes but Apple Music also has to do something that is different and new that users like. We just haven't seen if its going to do that yet.

Bloomberg reported on Thursday that Apple is trying to hammer out some last minute deals with record companies in time for unveiling at the Worldwide Developers Conference on Tuesday.

And so unless that happens we just won't know if Apple's service will change the game in a way the music industry wants or if it will just be another competitor in a profit-scarce market.