Everyone Agrees Ohio State Is The Team To Beat 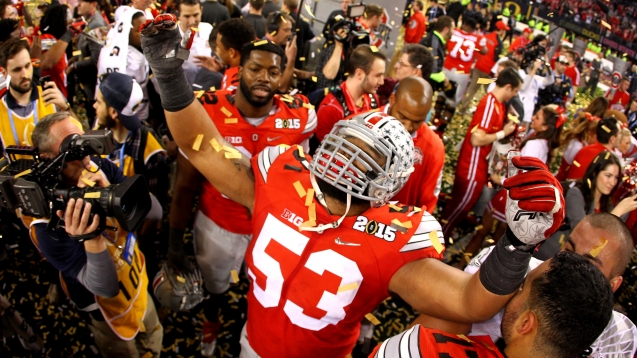 SMS
Everyone Agrees Ohio State Is The Team To Beat
By Eugene Daniels
By Eugene Daniels
August 23, 2015
Ohio State's unanimous No. 1 on the AP's preseason poll may not equal another national championship this season.
SHOW TRANSCRIPT

For the first time ever, a college football team is a unanimous No. 1 in the preseason AP poll: 2014's national champs, Ohio State.

To say no one is surprised would be an understatement. The Buckeyes killed it last year and are poised to do basically the same thing in 2015.

Fourteen of their starters from 2014 are back, and they have at least two possible Heisman Trophy candidates. (Video via Ohio State University)

But Ohio State fans should definitely take the news with a grain (or maybe even a bucket) of salt. Being No. 1 in the preseason isn't always a good thing.  (Video via Ohio State University)

"In four of the past seven seasons, the preseason No. 1 has finished in 10th place or worse," ESPN reporter Heather Dinich said Sunday.

Also keep in mind, since 2004, no team chosen as No. 1 in the AP preseason poll has won the national championship.

The Buckeyes open their season on September 7 against Virginia Tech.