Everybody Has A Prince Story; Celebs Tell Their Best Tales 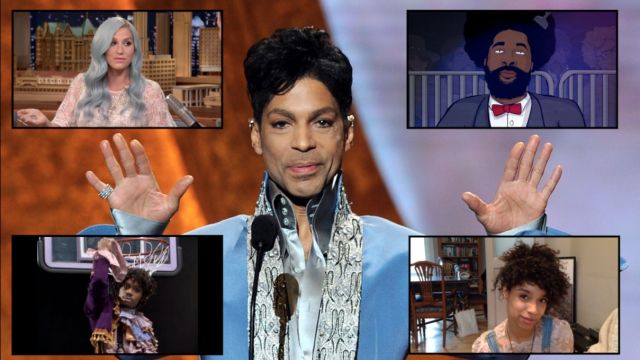 SMS
Everybody Has A Prince Story; Celebs Tell Their Best Tales
By Jamal Andress
By Jamal Andress
April 21, 2016
No matter who you are, if you encountered the artist known as Prince, you likely got a hell of a story out of it.
SHOW TRANSCRIPT

Few celebs have had the allure that Prince did throughout his career. And for that reason, it seems like everybody has a Prince story.

A story about being at Prince's house.

"You had a demo of your music, and you broke into Prince's house?" Jimmy Fallon asks

How do you break into Prince's house?"

Or Prince being at your house.

"Having Prince in my house yesterday was like, ... it looked actually like we were a top a cloud. ... Somebody asked me what were we going to do, and I said we're just gonna jam and have tea. So I think he read that and was like, 'OK. Well, I'll just have a cup of really strong tea,'" Lianne La Havas said.

A story about Prince and his legendary concerts.

"Prince performed, and when I tell you I was trying to be right in front of the stage. ... Then he looked at me and called me up there. I'm like, I can't come up there. But I went!" Queen Latifah said.

"I'm dancing and his song is on, and I completely forgot about the show, the character or acting at all. ... And I kind of looked over at him and he gave me a look like, 'Hey, man. I'm proud of you,'" Max Greenfield says.

Or about disappointing Prince after one of his legendary concerts.

"His assistant comes over and hand's me a blank DVD case and says, 'Play this.' When I open the case, I was really taken aback, 'Finding Nemo?' ... I was just like, 'Did I get fired and replaced by a cartoon fish?' Yeah, yeah I did," Questlove said.

And of course, the most famous story of all.

"I learned something that day: Don't judge a book by its cover. This cat could ball man," Charlie Murphy said.

"It made Prince laugh, and he liked the sketch so much, you were the cover of his last release," Jimmy Fallon said.

It seems when you interact with a music icon, you tend to get a pretty good story out of it.

This video includes clips from NBC, Comedy Central and NME and images from Getty Images.