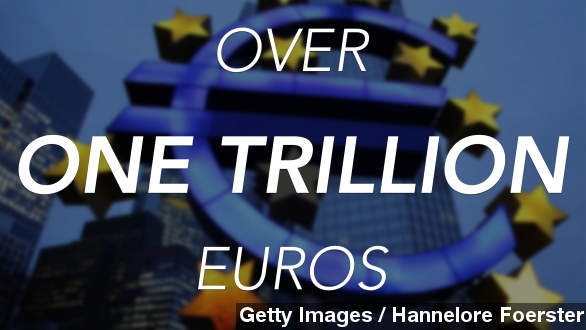 In a historic announcement, the European Central Bank said Thursday it will start a massive bond-buying program, otherwise known as quantitative easing or QE, this March.

Sixty billion euros worth, every month, through Sept. 2016. (Video via European Central Bank)

That comes out to be more than a trillion euros in total, or more than $1.15 trillion. And it’s quite a bit more than the media’s early estimate of 50 billion euros per month.

In part, the goal of QE is to combat deflation. When currency gains value, people tend to sit on it instead of spending it, which is bad for the economy. But high inflation is also bad.

What the ECB wants to do is find the happy medium at around 2 percent.

While implementing a QE policy in individual countries is one thing, the eurozone is something else entirely because it consists of a total of 19 countries. That makes implementing a successful QE policy a little trickier.

For starters, not everyone is on board — especially Germany.

That’s because, as the eurozone’s strongest economy, Germany believes it may end up shouldering weaker nations’ debt. German members of the ECB governing council are expected to oppose any QE measures. (Video via European Central Bank)

Then, as Bloomberg points out, there’s the possibility that the QE just won’t work as it’s supposed to. Instead of folks spending all the fresh euros they’re gaining from the policy on their floundering economies, they may decide to save instead. Or invest the money in other economies.

The Wall Street Journal says the separate economies and banking systems could negatively impact the effectiveness of any QE measures as countries such as France and Italy neglect to make more reforms.

Still, The Financial Times says this may be the best time for the ECB to start implementing QE policies. High spending, lower oil prices and a relaxation of fiscal austerity all create what FT says could be a "favorable wind" behind the ECB's announcement.

Along with the QE announcement, the ECB also said it'd be maintaining eurozone's interest rate at 0.05 percent.

This video includes images from Getty Images and Domenico Citrangulo / CC BY 2.0.