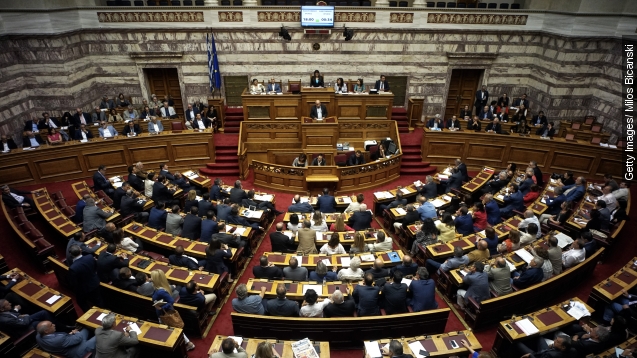 Greece is out of time. Over the weekend, eurozone finance ministers held an emergency meeting without Greece, where they decided not to extend the flailing nation’s bailout package past Tuesday.

“I think we must conclude that, however regretful, that the program will expire on Tuesday night,” Eurogroup President Jeroen Dijsselbloem said during Friday’s emergency meeting in Brussels.

And Tuesday morning, Greek Finance Minister Yanis Varoufakis confirmed that the country will not pay its debt to the International Monetary Fund. Without the bailout package, that means that after weeks of tense and occasionally hostile negotiations, Greece will default. (Video via The Financial Times)

The decision comes after Greece’s Prime Minister Alexis Tsipras announced a surprise referendum that’d put the onus of accepting the EU’s bailout terms on the people, rather than the government. (Video via EPT)

The referendum was approved by the Greek parliament hours after Tsipras proposed it on Saturday.

That vote is due to be held on July 5. But with no bailout extension, that means Greece will be in financial freefall for nearly a week— and that’s the best case scenario. (Video via European Council)

Early polling indicates that the Greek public will vote “yes” to the proposed conditions, against the advice of their prime minister. There are also reports of factions within the Greek government willing to accept a revised deal sent by European creditors on Monday. (Video via RT)

On Tuesday morning, the government announced a proposal for a separate two-year financial package, to be coupled with debt restructuring, to cover the country’s costs. Creditors did not immediately respond. (Video via Syriza)

If that proposal goes nowhere and the referendum fails to accept bailout terms, it will likely push Greece out from other nations using the Euro. (Video via European Central Bank)

Or, as most have put it, the Grexit.

Whatever the case, it doesn’t appear the people of Greece have a whole lot of faith in their government.

Multiple outlets reported on Saturday that Greeks were lining up at ATMs to withdraw their money, despite the 60 euro withdrawal limit placed by the government. All Greek banks are closed until the referendum.

According to The Economic Times, more than a third of Greek ATMs ran out of money after the withdrawal rush.

And it doesn’t seem like eurozone financiers have much faith either. Saturday’s emergency meetings was all about damage control as financiers tried to figure out the best way contain the potential economic wreck. (Video via European Council)