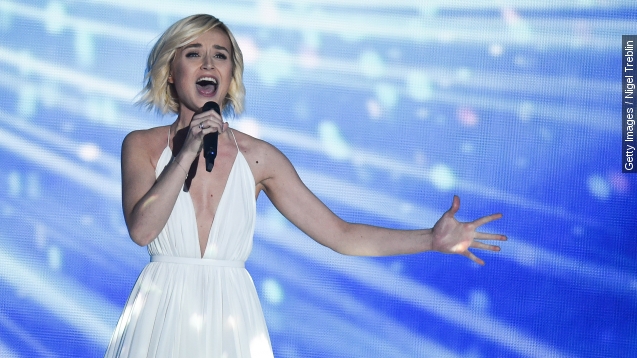 SMS
Eurovision Just Can't Keep Politics Out Of Competition
By Ben Lawson
By Ben Lawson
May 23, 2015
Eurovision, Europe's annual singing competition, is supposed to be politics-free but that's not usually the way it goes.
SHOW TRANSCRIPT

Whether its through the audience's reaction or the performances themselves, issues from across the continent usually manage to slip in and this year was no different.

First, there was the reaction on Twitter to Greece's performance. It's tradition for whoever wins the competition to host it the next year which, the event's organizers admit, can be a lot to ask financially.

"It's become so expensive. It is a burden to win at times," Eurovision spokesman Christer Björkman said.

And Greece is currently embroiled in a major financial crisis. So there were quite a few jokes on Twitter alleging that hosting the competition might be what finally does the country in. Some even suggested the country should lose on purpose.

Then there was the Lithuanian performance featuring two same-sex couples kissing on stage. Homosexual acts were outlawed until 1993 in Lithuania and some say there still isn't widespread acceptance towards same-sex couples in the country.

Coincidentally, this occurred on the same day Ireland voted to allow same-sex marriage in the country.

Last year's Russian competitors got more than a little boo-ing from the crowd, likely due to Russia's alleged involvement with the conflict in Ukraine.

The Independent reports the crowd was so bad that the organizers actually used "anti-booing technology" at this year's event so jeers from the crowd wouldn't make it into the broadcast.

So this year's song "A Million Voices" sent a happy message of world peace and cooperation, which apparently resonated well with viewers and judges. The country came in 2nd this year.

Sweden were the heavy favorites going into this year's contest, and the country didn't disappoint. Måns Zelmerlöw's rendition of "Heroes" finished in first place with a commanding lead, earning Sweden its sixth ever Eurovision victory.