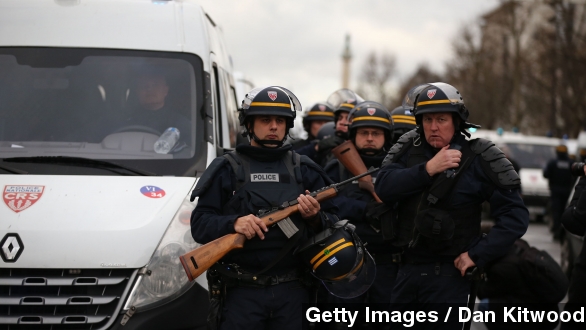 The European Union is looking to increase collaboration to boost security in the wake of the Paris terrorist attacks.

In their first meeting since the attacks, EU ministers met in Brussels to look at the group's strategy going forward, and it wasn't limited to intelligence sharing in Europe alone. (Video via BBC)

"I'm just having now, before we start, a meeting with the secretary general of the Arab League, as the threat is not only the one we faced in Paris, but also spreading in many other parts of the world starting from Muslim countries," Federica Mogherini told Newstalk 106-108 FM.

Security has been high, not only in France but also in neighboring Belgium, where last week authorities say they stopped an imminent terror attack by killing two suspects and capturing one more. (Video via CNN)

It's a crucial moment for the EU to react not only because of the threat it faces from terrorists, but also the fear that the EU itself hurts security on the continent.

Nationalist groups like PEGIDA in Germany have targeted immigrants, especially Muslims, as a security threat, and the European Union facilitates immigration because it allows the free movement of citizens among its member states. (Video via Deutsche Welle)

Plus, the EU was already under threat, long before the terrorist attacks, because of anger over its handling of the European debt crisis, which has dragged down a number of its members. (Video via Bloomberg)

That anger had already given rise to anti-EU political parties, which won several seats in last spring's elections and aim to weaken the union and strengthen their individual countries. (Video via European Parliament)

Officials say the talks in Brussels won't lead to any final decisions, but instead focus on the EU's options going forward.