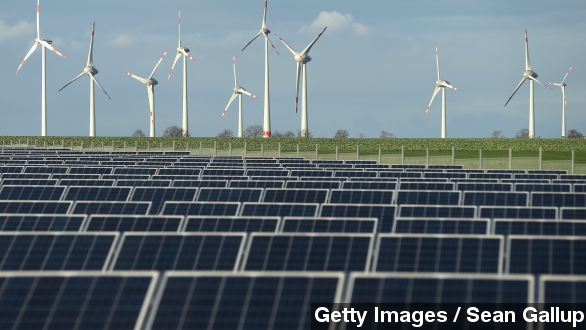 Europe's solar eclipse has come and gone, and the lights are still on across the region, despite many dire warnings.

Europe has been one of the strongest adopters of solar energy — the region relies on solar for about 3% of its energy annually. And on sunny days in Germany, solar power makes up as much as 40% of the country's energy supply.

And, Europe shares its energy on the same grid. That means changes affect the entire region.

So, the idea of that power source dimming for a few hours during a peak time Friday and then surging up after posed a challenge for European energy suppliers.

The eclipse did have an effect, but, luckily, it didn't really do any damage.

This is what two normal days of solar energy look like in Germany. As you can see, the output rises during the day and goes down to zero at night.

Now, here's how the energy output looked on Friday. As you can see, the eclipse caused solar output to dip down and then quickly spike up.

According to Deutsche Welle, German engineers coordinated across the country and ramped up fossil fuel plants at just the right time to offset the eclipse.

Italy, on the other hand, decided to play it safe. The country relies on solar for about 8% of its energy annually. For the eclipse it proactively shut down 25% of its solar energy and set aside reserves of gas and hydroelectric energy.

Still, Bloomberg reports the eclipse led to a pretty big fluctuation in the price of power in Europe. During the darkest 15 minutes of the eclipse, the price for a megawatt-hour ranged from 950 euros, to negative 130 euros — that negative number means producers were paid not to put any power on the grid.

So it seems after this real time experiment of how solar energy works during an eclipse, countries who use the panels can breathe a sigh of relief.

Which is good news for China, which has led the world in solar installations for the past two years. The country is expecting a solar eclipse in March of 2016.

And the U.S. can also learn from how Europe handled the eclipse. We're expected to see our next eclipse in August of 2017.