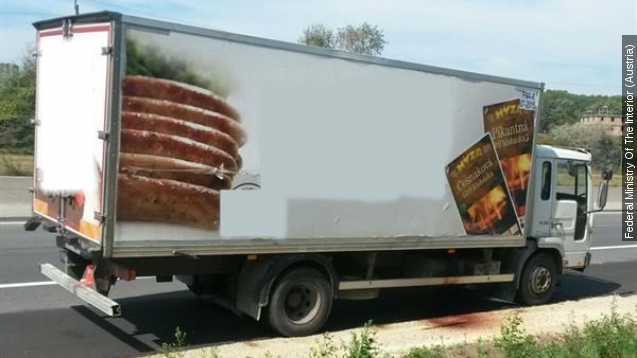 Europe's migrant crisis is still churning out gruesome scenes. An abandoned truck on the side of an Austrian highway was found Thursday packed with the bodies of refugees.

"They thought at first this was a breakdown, then they looked and found no driver. And then they saw that blood came out of the car," one police officer told Channel 4.

Officials say 71 bodies were inside the truck, which had been abandoned since Wednesday. Initial reports say most of the people inside suffocated to death.

The truck was found near Austria's border with Hungary, and bears Hungarian license plates. Hungarian officials say the vehicle is registered to a Romanian citizen and Austrian police say three suspects have been arrested.

At least some of the dead are believed to be Syrian refugees, who were likely on the last leg of the Balkans route, traveling to reach the relative safety of the EU. Eastern European countries like Macedonia and Serbia have been tightening their border security in recent weeks.

The migrant crisis has largely co-opted a summit of European leaders in Vienna. German Chancellor Angela Merkel called the discovery a reminder "that we must tackle quickly the issue of immigration and in a European spirit — that means in a spirit of solidarity — and find solutions."