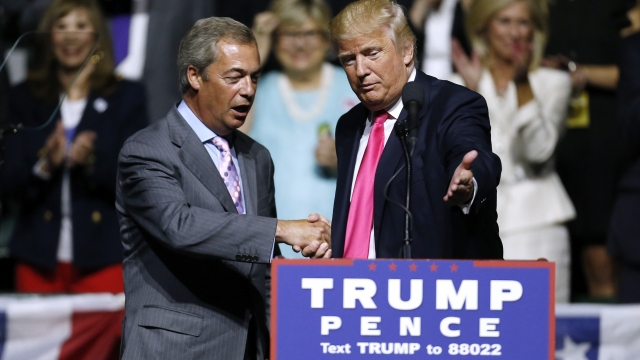 Far-right politicians from across Europe were some of the first to congratulate Trump on his victory.

And those politicians — and the political movements they represent — see Trump's victory as a sign of greater political shifts on the horizon.

SEE MORE: Europe's Far-Right Saw The Brexit And Now Wants Out Of The EU, Too

"The lesson for the Europeans is look at America — what America can do, we can do, as well," said Geert Wilders, leader of the Dutch Party for Freedom.

Some of the far-right parties seem ready to imitate Trump to try and win over voters in their own countries.

One Dutch politician said, "He has such a small campaign staff, so he relied very heavily on the ground on people in cities organizing things ... That's something I'm trying to copy."

And an anti-immigration party from Austria even sent members to the U.S. to study Trump's campaign. The party could win the Austrian presidency on Dec. 4.

This is all part of a trend across Europe where far-right parties are gaining popularity — mostly through the use of anti-immigrant sentiment, economic fears and emotional appeals.