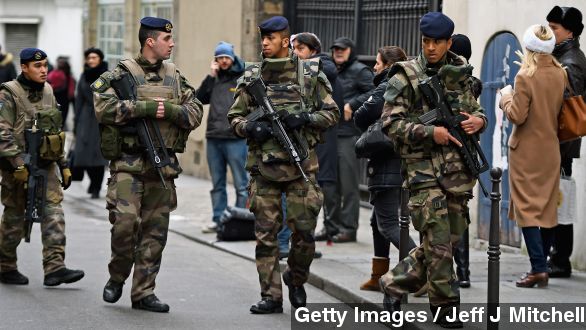 The mood in Europe is drawing plenty of comparisons to the response in the U.S. in the immediate aftermath of the 9/11 attacks.

Just as America launched its “war on terror," France and its neighbors are vowing a crackdown of their own. Here’s a look how those countries are responding to the Charlie Hebdo attack.

And on Friday, new laws took effect allowing the government to ban suspected extremists from leaving the country. (Video via i>TELE)

Belgium, too, is looking fast track anti-terror laws, including one that makes it easier for the government to strip away citizenship for dual nationals. (Video via Euronews)

There is an increased sense of urgency after anti-terror raids in Belgium stopped what authorities said was an "imminent attack." (Video via ODN)

Germany also carried out security sweeps of its own — arresting two people in Berlin. The government is considering a new law making it a crime to even prepare to travel to a terrorist training camp. (Video via Deutsche Welle)

And in the U.K.,  Prime Minister David Cameron is calling for tech companies to give governments greater access to encrypted communications used by terrorists. "As technology develops, as the world moves on, we should try to avoid the safe havens that would otherwise be created for terrorists to talk," Cameron said Friday.

Meanwhile, the European Union is considering legislation that would force airlines to provide European governments information on passengers. (Video via YouTube / SDMullis)

The Paris attacks renewed concerns that the European Union's open borders make it harder for authorities to track jihadists returning from Iraq or Syria.

The European Union’s police agency estimates somewhere between 2,500 and 5,000 Europeans have gone to fight in Syria and Iraq. What isn’t known is how many of those fighters have returned to Europe.