Europe Has A Migrant Crisis. Are Fences The Answer? 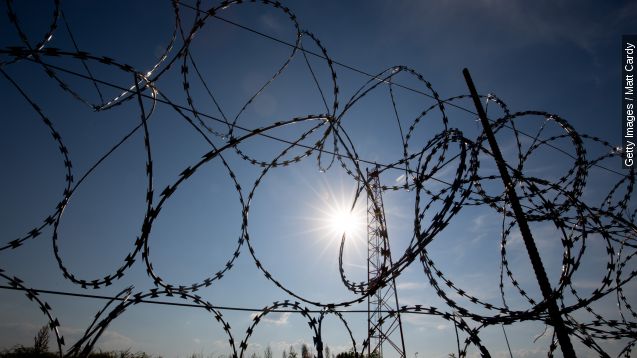 More than 25 years ago, Europe's iconic wall came tumbling down. (Video via U.S. Department of Defense)

Today, European nations are putting up new walls. It's an attempt to deal to with a record number of migrants at its borders. (Video via United Nations High Commissioner for Refugees)

Hungary's is nearly done. Along border with Serbia, the government is building an 11.5-foot-high fence to keep out the 2,000 or so migrants pouring into the country daily — many from war-torn Iraq, Syria and Afghanistan.

But for now, the massive undertaking has had the opposite of its intended effect. More migrants than ever are making the trip while they still can. (Video via delmagyar.hu)

Bulgaria has its own barrier in the works. When completed, the razor-wire fence will seal off about 100 miles of the country's border with Turkey.

And in Calais, in northern France, the British government has spent over $10 million on fencing and other security measures to prevent migrants from getting to the U.K. through the Channel Tunnel.

These governments say the walls are both legal and necessary. But critics point out such barriers tend to only redirect migrants elsewhere — often to more dangerous routes. (Video via United Nations High Commissioner for Refugees)

Take what's happened in Greece. To restrict the flow of migrants through its border with Turkey, the Greek government erected a 6.5-mile-long wall in 2012.

Today, those migrants are arriving by sea instead — and in greater numbers. Between January and July of this year, as many as 124,000 refugees had reached Greece's shores. (Video via United Nations High Commissioner for Refugees)

As for the fences, critics say they're not just ineffective — they're hypocritical.

Sixty years ago, in the middle Hungary's revolution, some 200,000 Hungarians were refugees themselves. (Video via U.S. National Archives)