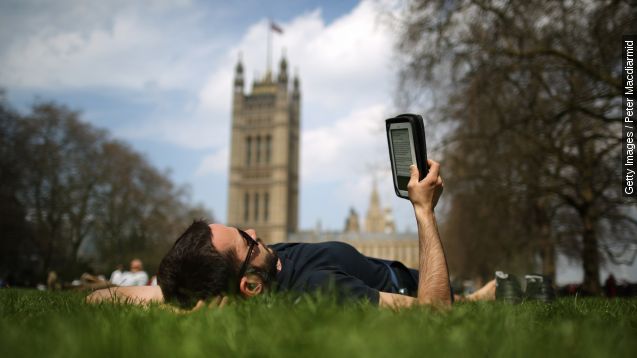 By Jamal Andress
June 11, 2015
Amazon has dominated the e-books market for years, and according to the EU, it could be using that dominance get publishers to agree to unfair deals.
SHOW TRANSCRIPT

Margrethe Vestager and the European Commission have had a busy few months.

"Dominant companies have a responsibility," Vestager said earlier this year.

In April, Vestager, the EU's Antitrust Chief, formally accused Google of abusing its dominance as as as a search engine. Now, Vestager has set her sights on another one of America's most dominant tech companies and one of its most popular services.

"Let me tell you a story about a book that keeps getting better," said someone in a promotional video for Amazon Kindle.

Amazon has dominated the e-books market for years, and according to the EU, CEO Jeff Bezos and company could be using that dominance get publishers to agree to deals that are unfair for the potential e-book competition.

If true, Amazon could ensure it gets the best deal because it would know about deals given to other companies.

And while we don't know if these allegations are true, we do know Amazon has no problem playing hardball with book publishers and swinging its e-book weight around. (Video via PBS / "Charlie Rose")

Throughout 2014, Amazon had several messy battles with book publishers over e-book prices while renegotiating contracts. Hachette Book Group and HarperCollins Publishers both felt the wrath of the nation's largest e-book publisher when Amazon was accused of delaying shipments, getting rid of pre-order options online and raising prices.

According to Codex Group, Amazon accounted for six out of every 10 e-book sales in March 2014.

Notably, the European Commission hasn't yet formally charged Amazon. As it stands, the commission is only conducting an investigation into the American tech giant.