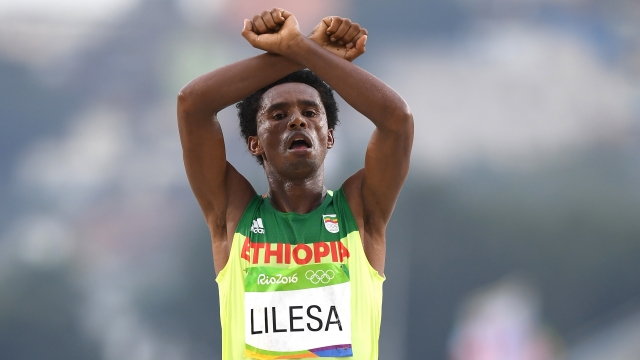 SMS
Ethiopian Marathoner May Have Put His Life In Danger With This Gesture
By Briana Koeneman
By Briana Koeneman
August 22, 2016
Simply making one gesture with his arms could have cost Feyisa Lilesa his freedom or even his life if he returns to Ethiopia.
SHOW TRANSCRIPT

Like many other Olympic athletes have in the past, Ethiopian marathoner Feyisa Lilesa made a gesture when he crossed the finish line in Rio Sunday night.

But simply making that sign with his arms could have cost the silver medalist his freedom or even his life if he returns home.

See, crossing your arms over your head like Lilesa did is a sign used by members of his Oromo tribe to protest the Ethiopian government.

Tensions between the Oromo and the government have been on the rise since last November, when the government announced plans to reallocate Oromo farmland for development.

The announcement sparked intense protests across the nation that lasted for months.

Officials scrapped the idea back in January, but demonstrations flared up once again in recent weeks over protesters who are still being detained.

And according to a Human Rights Watch report, the government is using violence to stop the protests. The group says more than 400 people have been killed and thousands more injured.

Because of violence like that, Lilesa says he can't return to Ethiopia after the Olympics. He says he might stay in Brazil or go to Kenya or the U.S. if he can.

It's unclear if his post-race gesture will affect his big win in Rio. The Olympics committee has stripped athletes of their medals over political statements in the past.